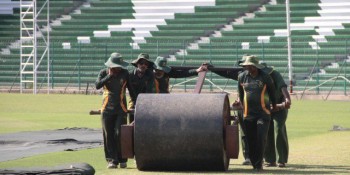 HARARE: Zimbabwe have left Harare for a high-stakes tour of Pakistan, national cricket association spokesman Lovemore Banda said. “The team has left [Harare)],” Banda said. “They are going [to Pakistan] via Dubai.” There were doubts whether the five-match tour would go ahead after the massacre of 45 Shias in an attack on a bus in Karachi last week. It is the first tour of Pakistan by a Test-level team since seven Sri Lankan cricketers were wounded during a 2009 attack by militants in Lahore. Zimbabwe are scheduled to arrive inRead More

DUBAI, 17 MAY, (DNA) – The International Cricket Council (ICC) Sunday told the Pakistan Cricket Board (PCB) and Zimbabwe Cricket (ZC) that it will not be appointing its match officials for the upcoming series between Pakistan and Zimbabwe. The ICC’s decision has been made after receiving a report from its security consultant, an ICC statement said. The ICC Board, during its April meeting, had decided that the playing conditions relating to the appointment of match officials could be waived to allow the PCB to appoint local match officials for thisRead More