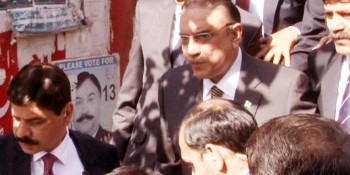 RAWALPINDI: An accountability court here on Thursday granted permanent exemption to Pakistan Peoples Party (PPP) co-chairman and former president Asif Ali Zardari from appearing before it in an illegal assets reference. Zardari had failed to appear for the hearing twice, citing reasons of poor health and lack of security. On his plea, Rawalpindi Accountability Court Judge Khalid Ranjha granted Zardari exemption from appearing before it, permitting him to be represented by his lawyer Farooq H. Naek in upcoming hearings of the case. The court has summoned witnesses for the nextRead More