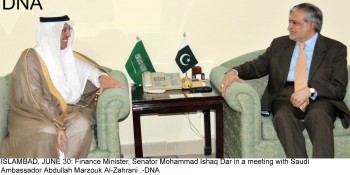 ISLAMABAD: The Ambassador of Saudi Arabia, Abdullah Marzouk Al-Zahrani called on Finance Minister, Senator Mohammad Ishaq Dar here Thursday morning. The Ambassador exchanged greetings with the Finance Minister for the upcoming Eid ul Fitr and also discussed matters of mutual interest. The Saudi Envoy on the occasion said that undoubtedly Pakistan had made significant economic headway under the present Government and that strong foundation has been laid for growth and development in future. He said economic stability in the country was a strong stimulus for foreign investment. He wished theRead More

RIYADH: Ten Pakistanis have been executed in Saudi Arabia so far in 2015, as the kingdom’s total number of executions rose to 88 on Tuesday. The interior ministry identified the latest to be put to death as Saudi nationals Awad al-Rowaili and Lafi al-Shammary, who were convicted of smuggling amphetamines. They were executed in the northern region of Jawf, the ministry said in a statements on Tuesday. Another Saudi, Mohammed al-Shihri, was separately put to death in the southwestern region of Asir for murder. The conservative Islamic kingdom executed 87Read More 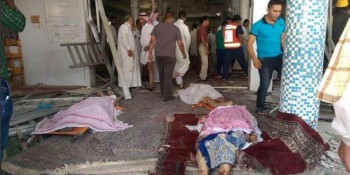