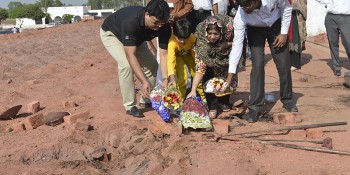 LAHORE: An Anti-Terrorism Court (ATC) on Thursday indicted 106 suspects in the Kot Radha Kishan Christian couple lynching that took place last year. The court has also issued summons for tomorrow for witnesses in the case in order to record their statements against the suspects involved in Shama and Shahzad’s lynching. The indictment of the 106 came after the police submitted a challan (charge-sheet) against the suspects at the ATC in Lahore Thursday. The challan states that Maulvi Mohammad Hussain, Maulvi Arshad Baloch and Maulvi Noorul Hassan were involved inRead More