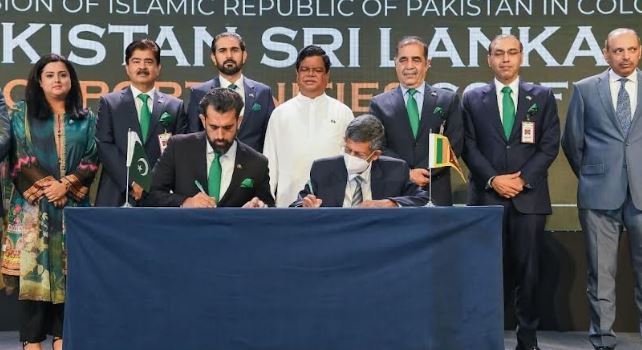 RCCI President Nadeem Rauf, while providing details, said that the conference, organized by the RCCI in collaboration with the High Commission of Pakistan in Sri Lanka, drew the participation of over 100 Pakistan business representatives.

RCCI President Nadeem A. Rauf said that the FTA of the two countries could not reach its full potential due to technical disputes, whilst expressing commitment to enhancing trade relations by removing various impediments.

Being the third largest chamber in Pakistan, the RCCI, he said, was keen on creating synergies among regional countries. “We are keen to enhance trade through mutual cooperation and facilitation,” Rauf added.

Earlier, the Acting High Commissioner of Pakistan Tanvir Ahmad in his speech pointed out that a lack of awareness, heavy dependence on traditional export categories were drawbacks. He emphasized the need to use such forums to further strengthen the existing bilateral trade and investment linkages between the two countries and their respective private sectors.

RCCI Group Leader Sohail Altaf said that they are exploring opportunities to expand tourism and aviation between Sri Lanka and Pakistan.

“Tourism is a great opportunity for the two countries to work in collaboration. We need to enhance our air connectivity through collaborative efforts and discussions in this regard have taken place at many top-ranked meetings. We want more flights to be operated between the two countries,” he said.=DNA