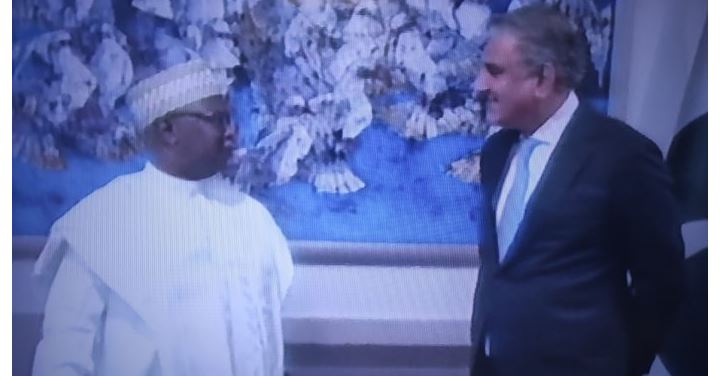 The Foreign Minister and the OIC Secretary General reviewed the agenda of the 48th CFM and exchanged views on the main outcomes expected from the Conference. They also discussed the issues confronting the Islamic Ummah and the role of the OIC in that regard.

The Foreign Minister highlighted the special significance of the 48th OIC-CFM for Pakistan, as it is coinciding with the celebration of the 75th year of Pakistan’s independence.

Whilst highlighting the grim human rights and humanitarian situation in the Indian Illegally Occupied Jammu and Kashmir (IIOJK), the Foreign Minister expressed appreciation for OIC’s principled position and consistent support for the just struggle of Kashmiris for their right to self-determination.

Welcoming the recent adoption of the resolution at the United Nations General Assembly designating 15 March as the International Day to Combat Islamophobia, the Foreign Minister lauded the support extended by the OIC and its Member States to Pakistan’s initiative. He commended the proposal to appoint OIC’s Special Envoy on Islamophobia to help coordinate the work of the Organization and its Member States’ for addressing discrimination and stigmatization of Muslims all over the world.

Referring to the humanitarian and economic crises faced by the Afghan people, the Foreign Minister stressed the importance of the implementation of decisions taken at the Extraordinary Session of the OIC-CFM held in Islamabad on 19 December 2021, and welcomed the operationalization of the Humanitarian Trust Fund for Afghanistan.

The OIC Secretary General assured the Foreign Minister of the OIC Secretariat’s full support and cooperation during Pakistan’s chairmanship of CFM.