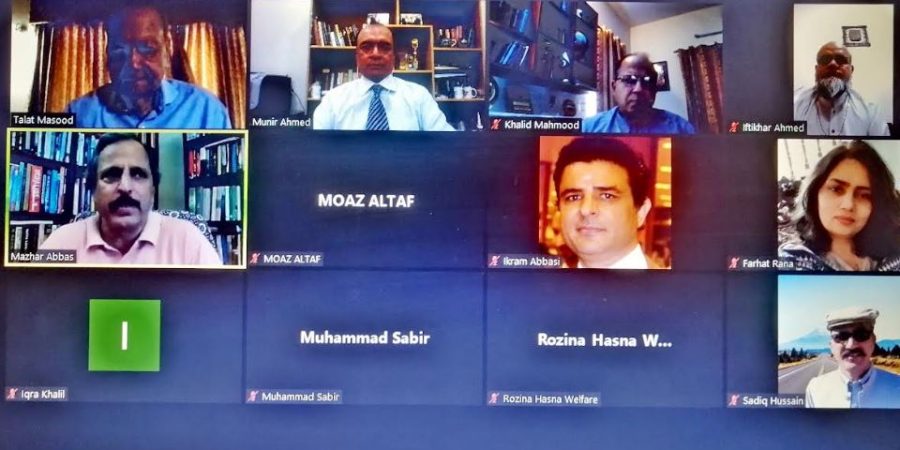 Islamabad, MAY 21 /DNA/ – Speakers at the Devcom-Pakistan webinar opined that multiple threats are confronting Pakistan at this historic juncture. The country is at the verge of collapse due to all accumulated domestic and international geopolitical blunders. All stakeholders are guilty of this chaos, crisis and clash of vested interests. National interest seems absolutely compromised. Sanity shall prevail to consolidate real-time solutions to combat internal and external threats ranging from geopolitical to national leadership crisis, socioeconomic failures and nontraditional security challenges.

The well-known geostrategic affairs experts suggested that the controversial figureheads in the political arena and in the state institutions shall remain silent for a while. A national economic revival commission shall be formed. The commission shall have indigenous, noncontroversial and nonpolitical technocrats. It should be formed by the state institutions through a consultative process. Let the politicians sit together to work sanely.

Lt. General retired Talat Masood urged the large political parties to act sanely and resolve their conflicts and reservations in the parliament. We shall not postpone the moment of truth at this critical moment rather face it rationally. Pakistan needs to improve its security situation while balancing out its geopolitical positioning. We cannot undermine the bilateral relations with one or more countries to have preferred relations with another one. Domestic solidarity and political consensus is very important for pitching ourselves in the geopolitical scenarios.

Devcom-Pakistan Executive Director Munir Ahmed urged the military establishment to play its role in wiping off the politico-economic chaos in the best possible manner. Political tolerance and reconciliation is extremely important in the heated up political environment. It is adding to national economic fiasco and vulnerability to the geopolitical situations around us. We shall form a national economic revival commission having in the independent economic and financial experts to immediately review the situation and suggest an action plan for implementation through the government of technocrats, strongly supported by the establishment.

Senior journalist Mazhar Abbas said: Politicians need to resolve their conflicts within the parliament, not in the courts. We would not have three more martial laws if the judiciary had not validated Ayub’s martial law. It’s the judiciary that has played havoc with the systems in Pakistan, and encouraged the undemocratic forces and dictatorial regimes. Political consensus on fresh elections, depolarization and cooling down the political hatred would lead to a stable political situation at the moment.

Khyber Pakhtunkhwa Board of Investment and Trade chief executive Dr. Hassan Daud Butt highlighted the need to explore local natural endowment including human resource, and embrace the concept of glocalization. He emphasized that we must start to trust local experts and start living within our means. The regional integration and globalization is coming under stress because of the COVID 19 and also the Ukraine crisis. However, CPEC still remains a great opportunity to address our economic issues. A practical ease of doing business (EODB) must be implemented to attract investment. He stated Rashakai Special Economic Zone (SEZ) is progressing well while the diaspora is taking keen interest in light manufacturing, food and tourism sectors.