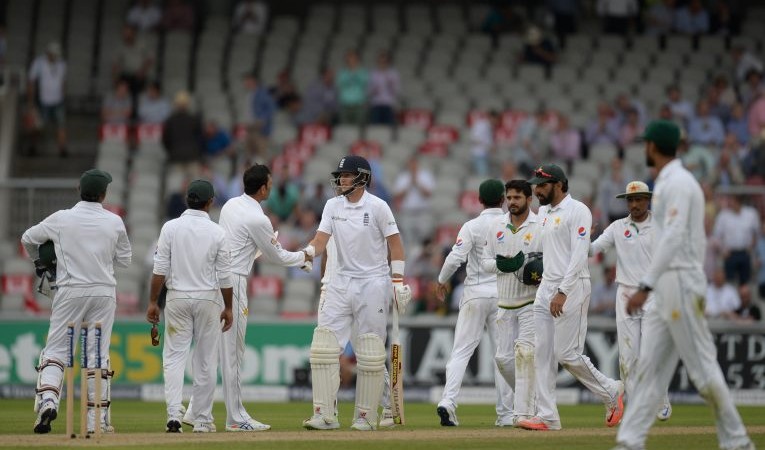 MANCHESTER: England on Monday set Pakistan a daunting target of 565 runs after home skipper Alastair Cook declared the second innings at 173 for 1 on day four of the second Test at Old Trafford in Manchester.

Cook was 76 not out and vice-captain Joe Root 71 not out.

It was the second time this match that England had gorged themselves on Pakistan’s attack, with opener Cook making 105 and Root a Test-best 254 in England’s first-innings 589 for eight declared.

The second innings saw England’s two most experienced batsmen put on 105 in 85 balls for the second wicket, with the duo adding 75 runs in just nine overs on Monday before Cook declared.

Pakistan will now need to rewrite the record books if they are to achieve a remarkable win — the most any side have made in the fourth innings to win a Test is the West Indies’ 418 for seven against Australia at St John’s in May 2003.

There are a minimum of 185 overs left in this match.

Cook came under severe criticism on Sunday for not enforcing the follow-on on Pakistan team despite 391-run lead.

England’s assistant coach, Paul Farbrace, defended Cook’s decision by terming it as a move to make the most of the placid wicket.

In reply of hosts’ mammoth 589, Pakistan’s batting line-up crumbled at 198.

565 is the second biggest target Pakistan have been set after the West Indies sent them to chase 573 at Bridgetown in 2005.

Pakistan leads the four-match series 1-0 after their 75-run win in the first Test at Lord’s.