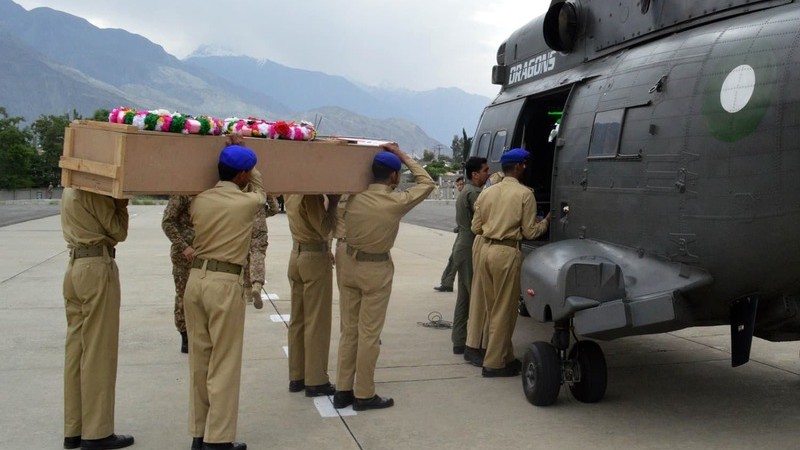 ISLAMABAD, 10 MAY, (DNA) – High-level delegations from Philippines, Malaysia, Indonesia and Norway have arrived in Islamabad to receive the bodies of victims killed in Friday’s helicopter crash in Gilgit-Baltistan’s Naltar Valley.
According to a statement released by the Foreign Office, the delegation from Philippines headed by the Under Secretary of Philippines Ministry of Foreign Affairs including the spouse and son of the late ambassador reached Islamabad on Sunday.
The delegation from Malaysia consists of senior officials and daughter of the Malaysian ambassador.
“Transportation of the mortal remains to the respective countries of the deceased would be finalised after consultation with the families and officials of the embassies concerned and after completion of all formalities,” the FO said in a statement.
Ambassadors of Indonesia and the Netherlands, who received burn injuries, were moved to Special Burns Unit in Kharian. The Malaysian envoy and the ambassador of Poland and his wife were, meanwhile, being treated at a local hospital.
The bodies of Ambassador of Philippines Domingo D Lucenario Jr, Ambassador of Norway Leif Larsen and the wives of ambassadors of Malaysia and Indonesian were air-lifted from Naltar to Rawalpindi and have been placed in the morgue of Combined Military Hospital (CMH).
The rest of the group of diplomats, who had gone to Gilgit, have also returned safely to Rawalpindi.
The helicopter crash on Friday claimed the lives of seven people including envoys of Norway and the Philippines; wives of the ambassadors of Malaysia and Indonesia; both the pilots and a crew member.
Pakistan Air Force spokesman Group Captain S M Ali strongly ruled out the possibility of any terrorist act behind the crash of M-17 helicopter near Gilgit. =DNA