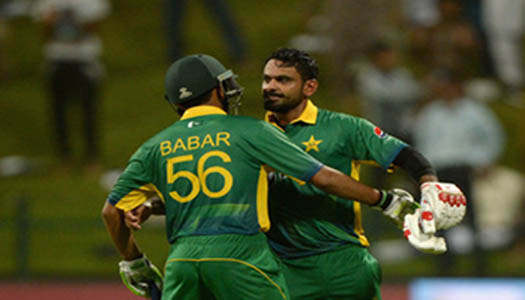 KARACHI: The Pakistan Cricket Board (PCB) on Saturday announced a 14-member line-up for the first of three-Test series against the West Indies, with Babar Azam’s inclusion being the highlight announcement.

The Test will be the second day-night affair in the history of Test cricket, after Australia hosted their neighbours, New Zealand, for a pink ball Test at Adelaide last year.

The middle-order batsman, who scored record 360 runs in the recently concluded One-Day International series on the back of three consecutive centuries, is expected to bat at one-down position in the absence of Mohammad Hafeez, who managed a seven-ball duck for PCB Patrons XI in a warm-up contest against the West Indies.

Veteran batsman Younis Khan will miss out the pink ball affair as he is yet to fully recover from dengue.

Opener Shan Masood, who managed just 71 runs in two Tests missed out from the squad. After impressing with two half-centuries in his first Test in England, left-hand batsman Sami Aslam retained his spot in the line-up.