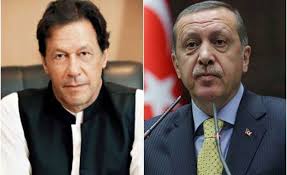 ISLAMABAD : Prime Minister Imran Khan has “deeply” appreciated Turkish President Recep Tayyip Erdogan for “once again raising his voice in support of the rights of the Kashmiri people” during his address to the United Nations General Assembly (UNGA).

Taking to the micro-blogging site, Twitter this morning, he said: “Turkey’s unwavering support remains a source of strength for the Kashmiris in their legitimate struggle for self determination.”

Addressing the 75th session of the UN General Assembly via video link, the Turkish president said the Kashmir dispute between India and Pakistan was a “burning issue”, and called for resolving it through dialogue.

“We are in favour of solving this issue through dialogue, within the framework of the United Nations resolutions and especially in line with the expectations of the people of Kashmir,” the Turkish leader added.

« Deteriorating health was just an excuse for Nawaz to flee the country: Shibli (Previous News)
(Next News) CM KP stresses need for implementation of digital technology in Govt departments »