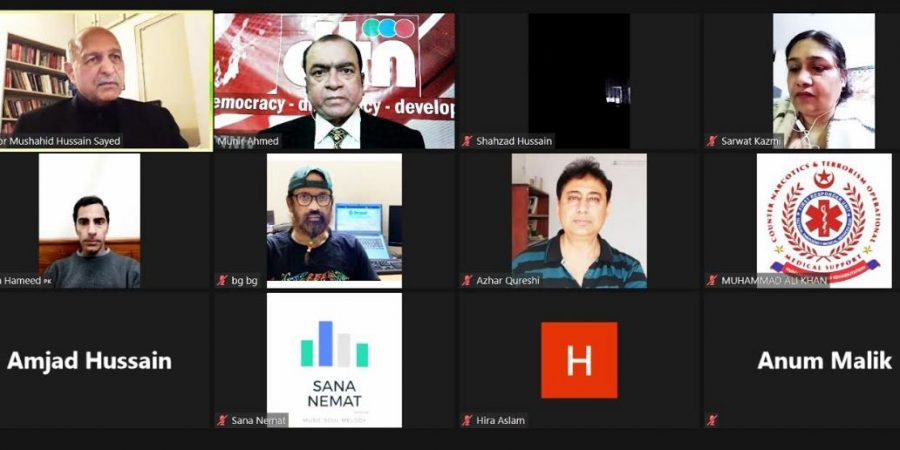 Devcom-Pakistan webinar is a timely effort to brainstorm on Pakistan-China partnership for national and regional security in the context of US-India emerging alliance: Senator Mushahid Hussain

Islamabad – The experts speaking at a webinar said that the interdependence for Pakistan and China has increased in the given geopolitical circumstances in the region. Common interests of both countries are intertwined now whether they are of human security in the era of pandemic, socio-economic or strategic alliance to counter the increasing US-Indian collaboration against China. Taking over the lead position on the two UN Security Council committees namely Taliban sanctions and Terrorism, India will be having more space to fiddle around the geopolitical situation in the region.

They said that Pakistan and China have to be more efficient and vigilant about the emerging situation and act more wisely in the coming days. Both countries might be having more difficult situations as India is expected to have hegemonic interventions in the region including undue interference in Afghanistan.

Senator Mushahid Hussain Sayed said with India as chair of the UNSC Taliban Sanctions Committee, the conflict in the region is feared to rise up. Pakistan needs to take China along with Iran on board very sincerely on the Afghanistan peace process where Taliban has to be given due share in the governance for sustainability of peace in the region. At the moment, The US is supporting India by all means at the moment as it is for the love of India but to strengthen a new proxy war agent against China. The strength of the region lies in unity beyond pity differences and conflicts.

Senator Mushahid said President Donald Trump’s policies have weakened the US economic streams, and same is the case with the western countries. Now, the balance of power is shifting to the east, and we the countries in Asia including central and south need to act smartly and stand united. The stronger countries have to lead the alliance whether it is form or informal in nature. In the emerging situation, Pakistan and China both need each other more than any time in the past. They need to increase their collaboration in all fields sooner than later.

Lt. General (Retd) Talat Masood said strategic convergence of Pakistan and China is vital for the national security of Pakistan, economic stability and regional peace. China has proved to be a reliable partner in all the moments of need. So we trust them in future as well. But we need to make our system efficient enough to match the pace of Chinese one. National security for Pakistan is just not strengthening the defense system, we need to focus on socio-economic development. Unfortunately, China-Pakistan Economic Corridor (CPEC) is not performing up to the expected level, and it may become a debt trap for Pakistan for which China would not be liable. We talk a lot but practically we are a sluggish and underperforming country where resources are depleted for nothing.

He aid we need to improve our defense capability that should be based on the Information and Communication Technology (ICT) and Artificial Intelligence (AI) instead of purchasing weapons for conventional war. The CPEC phase-2 is said to be launched for Chinese collaboration in agriculture and industry. It should have major initiatives in AI capacity building for defense systems and against cyber-attacks and to face the challenges of drone technology being used against Pakistan.

Devcom-Pakistan Executive Director Munir Ahmed said China is a fast-paced country and the leader of the global economic future. Even in the pandemic year 0f 2020 only China could survive through thick and thin. No doubt China is a friend but it means business. We will survive only if we play well. CPEC is not a free ride, it could be a ‘game-changer’ for Pakistan if we could know how to benefit from it. Otherwise it would turn to be another debt trap as we are already trapped by IMF, World Bank, Asian Development Bank and others. Human resource development and engaging it more productively shall be the main target of Pakistan while learning from China and getting the friendly country’s partnership in it.

Senior journalist Anwar Iqbal said China means business with Pakistan and every other country. Its blue eyed boys are the performing countries and economies with a huge lot of consumers. It is up to you how you benefit from it. China can provide soft loans for efficient investments, knowledge and expertise but at the end of the day it is up to your skills and priority how you use the available resources for your human security and defense systems. All the countries in the region get together to defuse the emerging US-India alliance. It is not only against China but against the peace and prosperity of the region. With Joe Biden in the presidency, there will be no significant change in the policy for the region. The countries have to take all the measures against any unexpected moves from the US-India alliance.