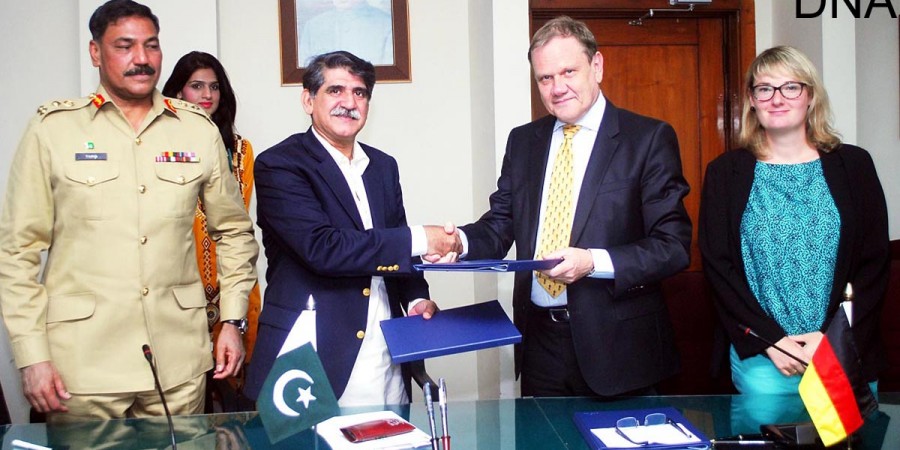 ISLAMABAD, 22 MAY, (DNA) – The Government of Pakistan has received additional support of 8.00 Million Euro for AJK Health Infrastructure Program.

Azad Jammu & Kashmir to be utilized under the Health Project funded by the German Federal Ministry for Economic Cooperation and Development through KFW Development Bank.

The agreement has been signed by the Secretary Economic Affairs Division Mr. Muhammad Saleem Sethi, the Director of the KFW Office Pakistan, KFW Development Bank Wolf Gang Moellers and the Secretary Health of AJ&K, Brig. Tariq Hussain in the presence of Almut Knop, Head of Economic and Development Cooperation, German Embassy.

The 2 year project totals an amount of 8.0 Million Euro will be utilised for earthquake affected health care facilities in Azad Jammu & Kashmir.

The overall goal of the programme is to provide facilities by equipping the newly reconstructed hospitals buildings by German Government along with up gradation of the existing hospital in capital of AJ&K.

The project will improve the quality of health services of the population in AJ&K and provide additional medical services related to treatment and diagnostic.

In the health sector, KFW Development Bank invests on behalf of the German Government in health programs to improve the overall health care of the AJ&K population at door step.

Speaking on the occasion, the EAD and the Secretary Health, AJ&K thanked the German Federal Ministry for Economic Cooperation and Development and KFW Development Bank for supporting the health care facilities and hoped that the project would go a long way towards providing a quality health services to the population. =DNA