Opposition’s haste for no trust move to save looted wealth: PM Imran 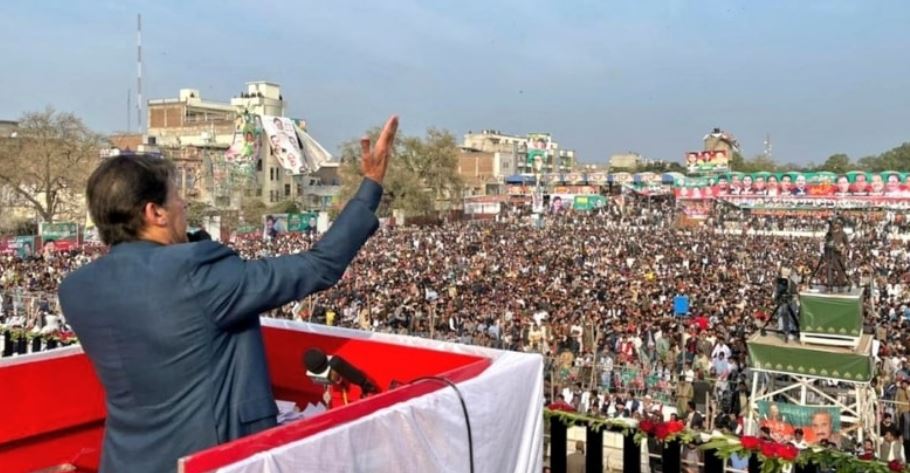 Mandi Bahauddin: Prime Minister Imran Khan on Friday launched a scathing attack against the opposition, particularly the Sharif family, accusing it of scrambling to move a no-confidence motion against the government in an effort to save its looted wealth.

The premier expressed these views while addressing a public meeting in Mandi Bahauddin that was packed with PTI supporters, loudly chanting and cheering as he gave his speech.

“Why is there haste in moving a no-trust move?” he asked, noting that PML-N President Shehbaz Sharif was currently facing a money laundering reference.

“Shehbaz, if you are innocent, then why do you ask the courts for more time? Ask them to conduct day-to-day hearings.”

PM Imran went on to say that when the opposition had filed a case against him in the Supreme Court, he had stayed in the country and had proved that he was sadiq and ameen (honest and righteous).

“I provided the documents the court asked for. I did not run away [or] ask for more dates. I told them to listen to the case [day-to-day]. So Shehbaz, why are you running?” he said, adding that the courts were free.

Turning his guns on PML-N Vice President Maryam Nawaz, the premier said that she was also “scared” due to the Chaudhry Sugar Mills case and was trying to “scare judges”.

“They want a no-trust move so that the government can be ousted and they can get off scot-free like they did during Gen Musharraf’s tenure,” he said, referring to the country’s former military ruler.

He predicted that the opposition would once again not only fail, but would end up in jail this time around.

‘No NRO for thieves’

PM Imran also categorically said the opposition would not receive a National Reconciliation Ordinance (NRO) — a term used to imply amnesty — until it returned the money it had stolen from the people of the country.

“They are scared because Imran Khan has no price, he will not give you an NRO like General Musharraf.”

He said that the cases against the opposition were old and they were asking him for an NRO, the same way they had asked Gen Musharraf.

He said that the courts were free, adding that the government respected the judiciary. Giving examples of the opposition’s alleged interference in the judiciary, he said that Justice Sajjad Ali was pressured and chased away from the courts as he was hearing a corruption case against them, claiming that the SC’s Quetta bench was “bought”.

“Now Maryam sahiba says she has tapes. Have you ever heard of politicians keeping tapes and blackmailing judges?”

He said that there was first a tape of former accountability judge Arshad Malik, who passed away in 2020. “Then a fake tape was made of a former chief justice to save themselves in a case,” he said, referring to the alleged audio clip of former CJP Mian Saqib Nisar.

“This is not what politicians do, this is what the mafia does,” he declared, calling on supporters to help the government combat them. “I have vowed to fight them as long as I am alive.”

However, he went on to say that the government was always working on how to lessen the burden of this inflation on the people of the country.

PM Imran also called on journalists to inform the people about the reason behind the hike in prices. “Supply lines were affected due to the pandemic. There was a shortage of commodities and they became more expensive.”

He said that petrol that was previously available for $40 per barrel was now being sold for $90. “What can we do about this? We have to import petrol.”

The prime minister said that the government had reduced duties and taxes on imports so that it could lessen the burden on the common man. “Every month, the government suffers a loss of Rs70 billion due to this.”

He highlighted that inflation had increased across the globe, noting that it was at an all-time high in the United States for the first time in 40 years. He also gave the examples of Germany and Turkey.

“If you Google this on your mobile phones, you will see that I am speaking the truth,” he said, adding that the government was committed to lessening the burden on the people of the country.

At the same time, the premier also highlighted that the country’s exports, remittances and tax collection were at an all-time high, adding that the country was now on the right track.