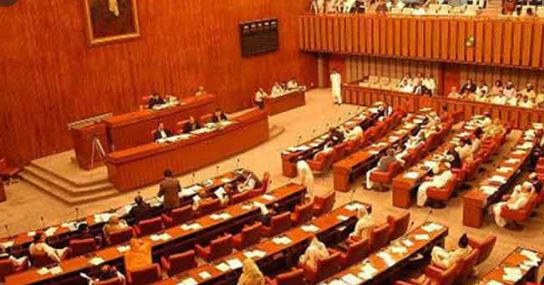 President of Pakistan Olympics Association (POA) Lt. Gen. (R) Syed Syed Arif Hasan briefed the Committee about the working, functions and overall performance of POA. He said that POA has to follow International Olympic Committee (IOC) charter and that it is clear that no one can interfere in the internal affairs of the federations, adding that POA constitution has been approved by its general council and IOC.

“The body of the Pakistan Olympic Association not be formed by will as its supreme authority of General Council”, he said adding that IOC gives us an annual grant of 0.075 million dollars and federal government does not provide any funding to the POA while it is the responsibility of the POA to get the players accredited to participate in the International Games.

The President of POA briefed the committee that for the first time in the history of Pakistan a parallel body of POA was created and the Olympic House was taken over in 2013. He said that after IOC sanctions the government of Pakistan signed Lausanne agreement with the IOC to ensure the Olympic charter.

Committee member Senator Rana Maqbool said that the situation has reached this point due to lack of better coordination between POA and the ministry, adding that both stakeholders forget all differences and work together for betterment of sports in the country. The Chairman Committee said that it is unfortunate that there is no good working between the Ministry of Inter-Provincial Coordination and Pakistan Olympic Association.

Senator Irfan ul Haq Siddiqui said that we do not want to get involved in any debate, it seems that we are playing the role of mediator today, apart from the disputes between the government and POA, who is responsible for Pakistan’s disgrace?

Chairman Committee Senator Raza Rabbani inquired whether it is the responsibility of Pakistan Olympic Association for selection of athletes in international games. On which Arif Hasan told the committee that the selection of players is done by respective sports federations and POA has nothing to do with this as the Impression about POA selecting players and not winning any medal is totally wrong.

The chairman Raza Rabbani said that this means that POA plays the role of a mailbox and expressed reservations over the content of the letter written to IOC last year. Responding to the reasons, President POA said that it was decided in the POA meeting as earlier we wrote a letter to Pakistan Sports Board on this issue but we did not get any response from PSB.

“The contents of the letter were written keeping in view the past events happening as we were threatened with handcuffs and government officials held press conferences against us”, he said.

During the meeting Secretary of Ministry of Inter-Provincial Coordination (IPC) Mohsin Chandana informed the Committee that the recommendations made by the committee in its Meeting held on 14th January, 2022 have been adopted.

« Indian Charge d’Affaires summoned to the Ministry of Foreign Affairs (Previous News)
(Next News) Opposition’s haste for no trust move to save looted wealth: PM Imran »