Masood Khan condoles with families of victims of Machh incident 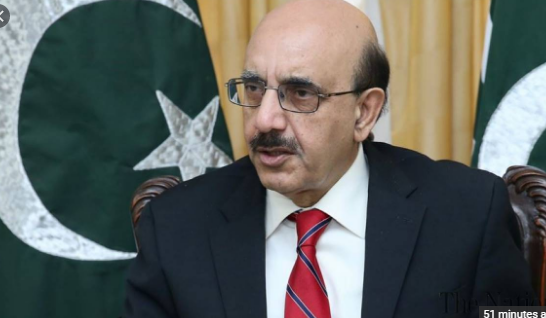 QUETTA, JAN 13 (DNA) – Sardar Masood Khan, President Azad Jammu and Kashmir while speaking to a 22-member delegation of the families of the Machh incident assured that the people and the government of Azad Kashmir stood by the Hazara community at this sensitive juncture.

The President met the delegation which called on him under the leadership of Majlisd-e-Wahdatul Muslimeen leader and former Provincial Law Minister Agha Syed Mohammad Raza. The delegation also included Secretary General of Majlis-e-Wahdat-ul-Muslimeen Arbab Liaqat Ali and member of the Martyrs Committee Amanullah and Owais Khan.

The President asserted that the peaceful and patriotic people of Hazara community have always played an important role in the development and prosperity of Pakistan, adding that the painful incident of Machh had traumatised the whole nation. “It is our belief that a murder of one person is the murder of all of humanity”, he said.

On the request of the delegation, the State President said that their demand for allocating exclusive seats for the students of Hazara community in the educational institutions of Azad Kashmir would be considered, and every possible step will be taken, as per resources.

On this occasion, Agha Syed Mohammad Raza said that the Machh incident was not the first tragedy but the Hazara community had been targeted by terrorists since long. Earlier, he said, community schools, colleges, hospitals and wedding functions were attacked, and the innocent people of the Hazara community were targeted in Pakistan and Afghanistan.

He said that whether it was international terrorist organisations like Daesh or India’s subversive terrorist proxies, their sole target is to destabilize Pakistan. Through terrorist activities, India is attempting to create mistrust within Pakistan and its brotherly neighbours, and it is trying to sabotage the strategic CPEC project, he said.

He said that the people of Balochistan, particularly the Hazara community strongly condemn genocide of Kashmiri people at the hands of the Indian Army and stand united with their Kashmiri brothers and sisters in their legitimate struggle for their inalienable right to self-determination. = DNA

« Politics of opposition parties based on vested interests: Murad (Previous News)
(Next News) Exports grew 50% to $2.4 billion in December: FBR »