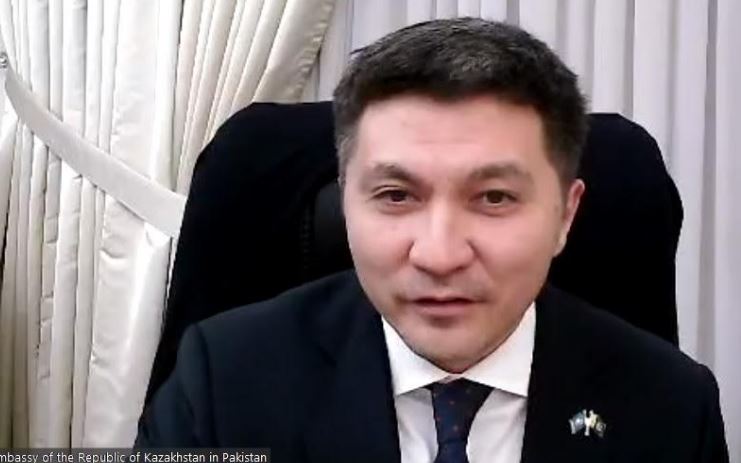 ISLAMABAD: Yerzhan Kistafin, Kazakhstan’s ambassador to Pakistan has stressed upon the need to exchange proper and authentic news exchanges reflective of ground realities between the two countries, for much needed mutual understanding. For this purpose, he has reiterated his proposal for closer collaboration between the ministries of information of Pakistan and Kazakhstan.

He was speaking at a special online session “Understanding Recent Happenings in Kazakhstan” organized by the Eurasian Century Institute (ECI), Islamabad.

The envoy gave a detailed briefing to researchers and experts of international relations on this month’s troubling events in his country, candidly explaining the context as well as forward linkages of these protests. He noted that the chaos created with these protests that resulted inhuge loss of lives and property besides threatening the stability of the state was essentially a coup de’tat aimed at toppling the government.

He shared that while the issues of socio-economic inequality and grievances of people are a reality, and a large number of people were on streets to express their discomfort, but the people’s rightful expression was misused and mislead by forces with vested agendas. He noted that evidence of foreign involvement has already emerged in investigation until now and it would be made public in due course of time.

Mr. Yerzhan highlighted that his country is back on the stable trajectory, and the government has announced sets of much-needed economic, socio-economic and political reforms that would be implemented in months and years ahead. The government of Kazakhstan would do all it can to decrease the gap between rich and poor and move towards equitable distribution of wealth and resources.

He made it clear that interests of local and foreign investors would ne safeguarded at all costs. The envoy made it clear that his country has a close strategic partnership with the Russian Federation, and the help of the Collective Security Treaty Organization (CSTO) in dealing with this chaotic situation only strengthens this partnership.