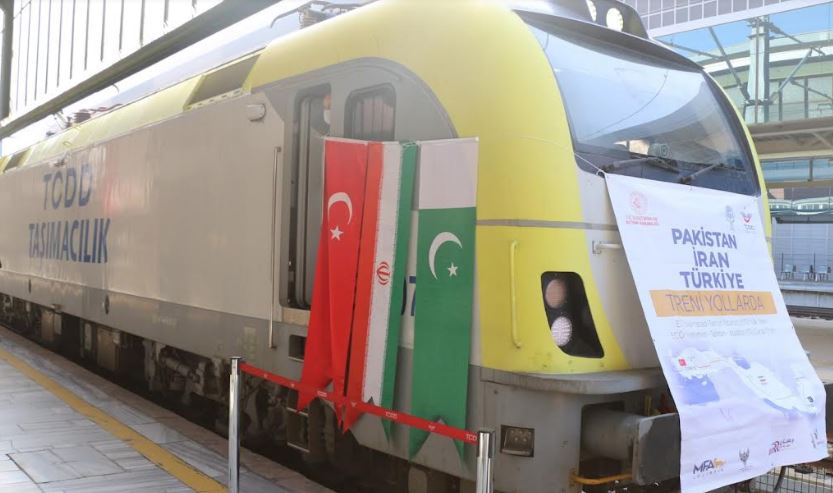 ANKARA, JAN 5 /DNA/ – A dignified ceremony was held today at Ankara Gar to mark the arrival of the first Islamabad-Tehran-Istanbul (ITI) train carrying goods from Pakistan to Turkey, via Iran after resumption of its operations. ITI Cargo train started its journey from Islamabad on 21st December 2021 and took 13 days to reach Ankara. Turkish Minister for Transportation, H.E. Adil Karaismailoglu and Member Pakistan National Assembly H.E Makhdoom Zain Hussain  Qureshi were the chief guests at the ceremony.

Speaking on the occasion, Member Pakistan National Assembly Makhdoom Zain Hussain Qureshi highlighted that ITI train would play an important role in enhancing regional connectivity and promotion of economic and commercial activities in the ECO Region. He added that the train would offer Pakistan an opportunity to further increase its exports and strengthen its connectivity with international markets including in Europe. Mr. Qureshi expressed hope that regular operations would continue on this route and measures would be taken to further shorten the journey time.

The Resumption of ITI Cargo Train after over a decade is manifestation of Pakistan’s policy of special emphasis on geo-economics and expanding regional connectivity to bring about economic prosperity and development in the region. The train will play a pivotal role in enhancing trade relations in the region and maximize the economic efficiency through regional connectivity.

Director General of TCDD Taşımacılık Hasan Pezuk, senior officials of the Turkish Ministry of Transport and Infrastructure, Ministry of Trade, ECO Secretariat, representatives of the Union of Chambers and Commodity Exchanges of Turkey (TOBB), and officials of Embassies of Pakistan and Iran also participated in the ceremony.