Islamabad residents to get Sehat Cards by December: Asad Umar 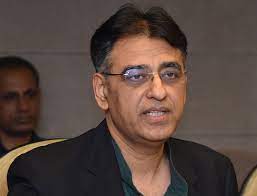 ISLAMABAD, Oct 31 : Minister for Planning, Development, and Special Initiatives Asad Umar Sunday said that the citizens of Islamabad would get Sehat Sahulat Cards by December this year.

He said a health facility like Sehat Sahulat Card was not even available in the United States.

He said a new hospital with a capacity of 200 beds was also being constructed in the constituency of NA-53.

He was addressing a public gathering here at Bahara Kahu along with Special Assistant to Prime Minister on Capital Development Authority (CDA) affairs Ali Nawaz Awan.

The minister said Ali Nawaz Awan was a star performer as no development work was possible without his efforts.

He said as many as 100 new tube wells were being installed to minimize the acute water shortage in the city.

Moreover, with the cooperation of the Punjab government, we also managed the supply of two million gallons of water daily for Islamabad from Rawal Dam, he added.

He informed that the water project for supply of 100 million gallons per day would also be materialized within six months.

The minister added that the single national curriculum was the hallmark of the PTI government.

Further, he said four new colleges were also under construction in the federal capital.