Experts discuss steps to tackle the trade of illicit tobacco 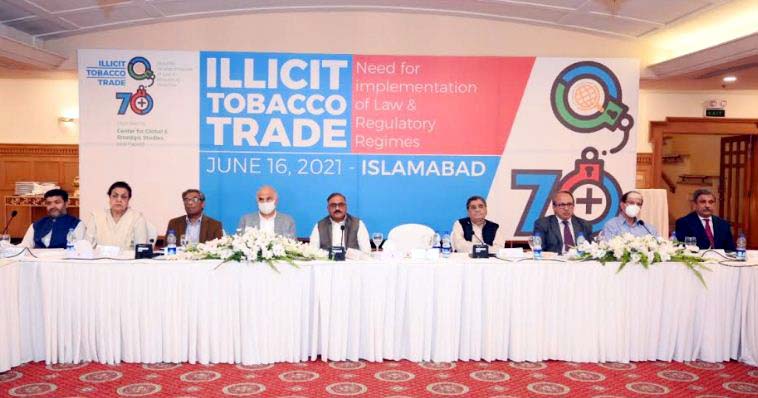 The discussion commenced with the opening remarks of Major General Hafiz Masroor Ahmed (Retd), Vice President, Center for Global and Strategic Studies (CGSS), Islamabad. He stated that today, we have gathered to discuss an important issue.

A lot of studies have been conducted on this issue and its shows that the impact of illicit tobacco trade is enormous in terms of revenue. In our current policy, many new initiatives are being incorporated to tackle this issue.

Ms. Maryam Raza, Research Associate, CGSS gave an introductory presentation on the subject.  She said that according to a report by IPSOS there are five major sectors in Pakistan due to which the tax evasion ratio is high. 65% of all tyres in Pakistan are smuggled.

Small traders who hold 40-50% market share contribute massively to tax evasion. Real estate in Pakistan is where the tax evaded/black money gets parked. Counterfeit medical drugs and illegally smuggled medicines have been the biggest challenge for law-enforcement agencies to combat.

Tax evasion is carried out through the illegal trade of tobacco and has three main strands, each having its own estimation of losses to national exchequer and additional violations of several other laws in the country.

Mohammad Jehanzeb Khan, Deputy Chairman, Planning Commission of Pakistan was the Guest of Honor at the occasion. Hecommended CGSS for organizing this timely discussion. He stated that today, we will bring to spotlight, the important public policy matters. He stated that being multidimensional, this matter is of great significance. He stated that there have been a lot ofcampaigns to highlight this issue at both national and international level.

The aim of these campaigns was to limit the use of tobacco rather to completely eliminate it. He further added that in recent times, we have not seen any significant decrease in the in the illicit tobacco trade. The key element and question is the ability to enforce and curb tax evasion and illicit tobacco availability and the enforcement structure of the country.

Other mechanisms other than pricing are also being worked out to tackle this issue. In terms of Pakistan, the policy must be relooked in a proper structured manner and must be long-term.

Dr. Ikram Ghani, Former Chairman Pakistan Tobacco Boardstated that there is no denying that in Pakistan, today illicit tobacco trade is on the rise. The price differential between the duty paid and local NDP cigarettes is leading to a further inclination towards consumption of illegally produced cigarettes. Today 40% of cigarettes sold in the country are illicit.

Prof. Dr. Saleem Mazhar, Pro-Vice Chancellor, University of the Punjab, Lahore stated that several awareness campaigns must be organized to highlight this issue at the macro level. Different workshops and sessions must be organized with maximum participation of the stakeholders. Furthermore, cooperation and collaboration amongst the stakeholders is very important in this regard.

Dr. Aman Ullah, Professor Law College, University of the Punjab, Lahorestated that tobacco is different from other trades. In future, for good governance we need to control illegal trade. We are facing issues with reference to FATA. We need to replicate success models.

Ms. Fatima Azim, Senior Vice President, Islamabad Chamber of Commerce and Industry stated that one major issue is how government is dealing with the illicit trade situation. There is need to absorb awareness and know the consequences. Discouragement should be made a key.

Mr. Tahir Alam, Former Inspector General of Police, Islamabaddiscussed in detail the Pakistan Tobacco Board Ordinance 1968. He explained the laws and implications. He stated that laws related to counterfeiting cigarettes mostly legal actions are required. Every tobacco grower should be registered and there must be strict monitoring by the Pakistan Tobacco Board. There must be intelligence squads to collect information on tac avoiders, smugglers and counterfeit of cigarettes.

Dr. MehmoodRehmani, Assistant Professor, Department of Business Administration, University of Sialkotstated that usually different reports give different statistics. We need to critically evaluate the issue and engage academia. Engaging academia will also enable us to understand the hurdles in implementation. We must have mobile applications where the complaints can be registered. We must ensure the health of the youth is being safeguarded.

Prof SohailShahzad, Former Vice Chancellor, Hazara University and Prof Law College, University of Peshawar stated that according to his researchregulation of governance must be seriously implemented keeping in view the health priority.

Mr. Tariq Bakhtawar, Former Director Anti-Money Laundering at the Securities and Exchange Commission of Pakistan stated that we need to have effective resource and implementation mechanism. We have done good work in terms of establishing the framework but implementation is also important. Our legal framework is in bits and pieces and we need a strong implementation regime.

Barrister Waqas Aziz Qureshi, Senior Law Expert & Managing Partner, Transact Advisory Service stated that in terms of Pakistan, the problem is in the implementation of the law. Radical problem needs radical solution. We need to keep check on plantation of tobacco and preharvest stage.Cigarette manufacturers must be known from grey and black markets. He stated that we need to have robust intelligence system for smuggling and taxation.

Mian Abdul Rauf, Former Advocate General Islamabad High Courtstated that there are various factors but one has to go for a more comprehensive legislation and regulatory regime. Regulatory regimes needs efficiency and implementation of laws. There is a difficulty to criminalize before going through SRO’s.

Prof. Dr. Shabbir Ahmed, Director, Area Study Center (Russia, China and Central Asia), University of Peshawarstated that it is discouraging to know that illicit trade is near 50% in Pakistan market. In Pakistan, our law enforcement agencies have 90% focus is on the counterfeit and only 10% is on the illicit trade. Therefore, from production declaration to raw material, the only solution is the rule of law.

Mr. Kamal Ud Din Tipu, Former Inspector General, Islamabad Police stated that we need to have a greater emphasis on the law enforcement. We need to understand sensitivities that cause repercussions if law is not enforced in a balanced manner. In Pakistan, we need to look into different dynamics of tobacco law enforcement and understand the cultures that regulate legal and illicit trade. For this, suitable punishment between criminalization and decriminalization should be implemented.

Mr. Ashfaq Ahmed Tola, Founder and President of Tola Associates stated we need to ponder upon the net sum of loss the country holds on account of illicit tobacco trade. He highlighted a few major reasons that have cultivated this culture in Pakistan. First is the domestic setup capacity of tobacco on local level. Second is the smuggling culture. He shared some ideas on tracing and tracking of the illegal trading. Furthermore, he emphasized that technical teams are required to be engaged.

The roundtable discussion was moderated by Ms. Palwasha Nawaz, Project Executive, CGSS, Islamabad and was attended by approximately 35 participants.