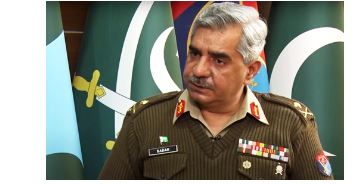 RAWALPINDI, JUN 14: Inter-Services Public Relations (ISPR) Director General (DG) Major General Babar Iftikhar on Tuesday said that the defence budget allocation for the fiscal year 2022-23, contrary to perception, had decreased after factors such as inflation and rupee depreciation were accounted for, and was now 2.2 per cent of the GDP from 2.8pc last year.

In the budget presented by Finance Minister Miftah Ismail on Friday, defence services were allocated Rs1,523 billion, which makes up 17.5pc of the total current expenditure and is 11.16pc higher than last year. In terms of expenditure, the defence budget is 16pc of the government’s planned total outlay — exactly the same as it was a year before.

The declared increase in defence budget was in sharp contrast to the cuts in spending on the development sector (11pc), health (31pc), education (1.5pc) and housing (77pc).

The allocation makes up nearly 1.94pc of the GDP and 16pc of the total expenditure planned by the government for the next year. The hike is almost at par with the average inflation calculated for the year ending on June 30.

He said there was an “annual debate” on army’s allocation when asked about the allocations. He said the defence budget was allocated considering the army’s “threat perception, challenges, deployment and the resources available”.

“So [after] considering at all these things, the army hasn’t had any [net] increase in the budget since 2020,” the DG ISPR claimed. “When you look at inflation and rupee depreciation, it (defence budget) was actually reduced. It was 2.8pc of GDP last year and now we are at 2.2pc so the budget is continuously going down in GDP terms.”

He said that after factoring in this year’s inflation, the defence budget had actually taken a hit of Rs100bn. “Despite these challenges, we did not allow any shortcoming in our capabilities,” Iftikhar added.

Elaborating on the measures taken by the army to curb its spending, he said instructions had been passed to conserve fuel and reduce expenditure on utilities, while Friday would be observed as a “dry day” where no official transport would be used except for emergencies.

DG Iftikhar further said the army had returned to the government Rs6bn from Covid allotments and Rs3.5bn from other allotments in last year’s budget.