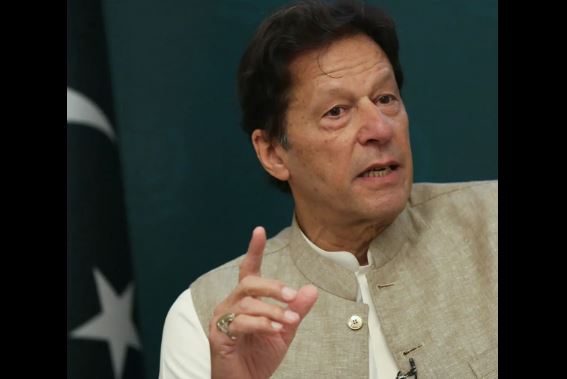 ISLAMABAD: Pakistan Tehreek-e-Insaf (PTI) Chairman Imran Khan said that the imported government’s anti-poor policies could be judged from the fact that they had set record of inflation in only two months because they were toeing the US line and had nothing to do with the public relief. Addressing PTI labor wing here at Khyber Pakhtunkhwa House on Tuesday, he said that the current ruling parties when in opposition took out ‘anti-inflation’ marches but now when they seized the power through the foreign conspiracy, they made the life of the rank and file miserable through record-breaking inflation.Imran Khan has said that the US has imposed a gang of thieves on the country and if they were let to rule anymore, they would harm the country more than the enemy.He said that the inflation would worsen further in the coming days as the finance minister had already hinted at raising fuel prices, because they were little bothered about the hardship and woes of the poor and underprivileged class.Speaking about the PTI government’s tenure, Imran Khan said that the then-opposition parties kept pushing for a complete lockdown in the country during coronavirus pandemic; however he said he did not pay any attention to their criticism because he wanted to protect the underprivileged class.Imran Khan said at that time he had realized that then-opposition parties did not care about the poor.He cited India’s example and said that the neighbouring country’s economy was destroyed after its Prime Minister Narendra Modi imposed complete lockdown due to which poverty increased in India and underprivileged class suffered the most.Highlighting PTI government pro-poor initiatives, Imran Khan said that loans were given to farmers without interest and loans were given to 2.5 million families without interest to build houses.The PTI Chairman reiterated that the incumbent government only followed the US’s dictations due to which it could not buy oil from Russia even at a discounted rate because it would displease the US.He urged the people to come out for peaceful protest on his call against the government imposed on them through the US-backed conspiracy, which was hell-bent destroying the country.Imran Khan said there is no democracy left in the country as the opposition leader was Raja Riaz, who was a ‘turncoat’ and would fight the next election on PML-N’s ticket and Federal Investigation Agency (FIA) has been subdued by a prime minister who is a money laundering suspect.He said the important individuals linked to money laundering case involving PM Shehbaz Sharif mysteriously died at regular intervals.Imran Khan said that the PTI government never stopped the long marches of the opposition parties but the incumbent government not only forcefully stopped PTI’s march but also framed face cases against PTI officials.PTI chairman claimed that the media houses were being barred from giving coverage to PTI and corrupt bureaucrats were being promoted to the top positions.He asserted that the ‘cabal of crooks’ is carrying out gerrymandering to rig the next general elections.