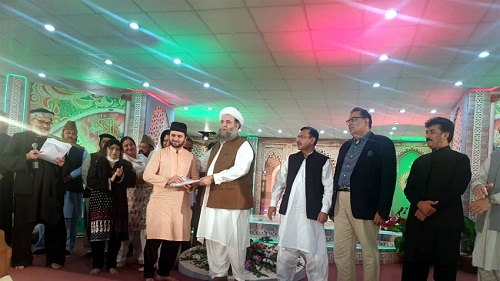 Islamabad : All Pakistan Naat Competition, jointly organized by Radio Pakistan and Pakistan Television in connection with Eid Mild-un-Nabi (SAW), was held at National Broadcasting House in Islamabad on Thursday.

In boys’ category of below 15 years of age, Syed Hassan Ali Shah from Sindh got first position, Ali Raza   from Punjab 2nd while Hanif Ahmad from Khyber Pakhtunkhwa clinched the third position.

In girls’ category of below 15 years of age, Sania from Sindh, came first while Iman Khalid from Khyber Pakhtunkhwa, second and Noor-ul-Huda from Azad Jammu and Kashmir, Islamabad Capital Territory and Gilgit-Baltistan bagged third position.

In third category for boys in the age bracket of 15-25 years, Usaid Alam from Azad Jammu and Kashmir, Islamabad Capital Territory and Gilgit Baltistan got first position, Syed Ahmad Shah from Khyber Pakhtunkhwa second while Moeen-ul-Haq from Punjab got 3rd position.

In the fourth category of girls in the age bracket of 15-25 years, Ayesha Akbar from Punjab, Moeeza Batool from Khyber Pakhtunkhwa and Mahnoor Khan from Sindh got first, second, and third positions respectively.

All the other participants got cash awards of 20, 000 rupees each. A blind contestant Hira Kainat was given a special prize of 10,000.

Lauding Radio Pakistan and PTV for holding such a great event to pay tributes to the Holy Prophet [Peace Be upon Him], he said that both institutions are playing a viral role in continuing this great tradition.

The Minister said that this year the Rabi-ul-Awwal is being celebrated with unique arrangements on the directives of Prime Minister Imran Khan to highlight the different aspects of the life of Holy Prophet Hazrat Muhammad (Sallaho Aaihe wa Alhe wa Sallam Khatam-un-Nabiyyeen).

In his remarks on the occasion, Minister of State for Information and Broadcasting Farrukh Habib commended Radio Pakistan and the PTV for organizing the Naat competition saying such events help link our children with the life and teachings of Holy Prophet Hazrat Muhammad Sallallaho Allaih Wa-alihi Wasallam, Khatam un Nabiyyeen.

The Minister said every Muslim has a special love and affection for the last Prophet whose teachings are a beacon of light for us.

He regretted that the sentiments of Muslims are hurt by some elements in the world community through blasphemous acts. He pointed out that Prime Minister Imran Khan has raised this matter at different international forums including the United Nations and the OIC and demanded to criminalize sacrilegious acts.

Farrukh Habib said our aim is take forward Pakistan as per the principles of State of Madina and the day is not far when the country will be transformed into a truly Islamic welfare state.

Secretary Information Shahera Shahid, in her remarks, on the occasion said Radio Pakistan and PTV hold the Naat Competition every year.

He said religious scholars, media, elders, parents, teachers and poets should shed light on the different aspects of the Holy Prophet for better education of our children.