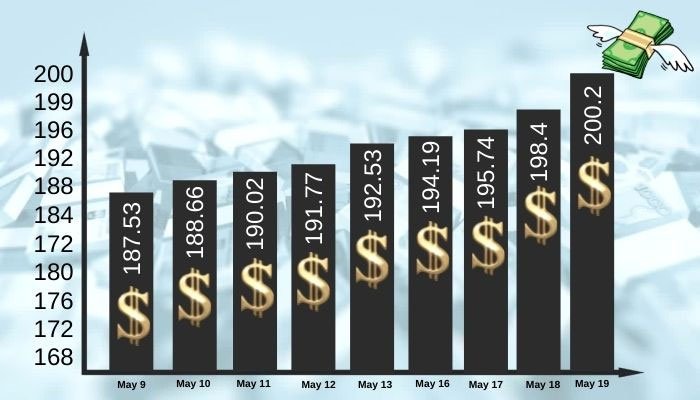 KARACHI: With the uncertainty over the revival of the International Monetary Fund (IMF) loan programme amid increasing political pressure on the government to announce snap polls, the Pakistani rupee slumped to a new historic low in the interbank market.

The rupee had closed at Rs198.39 yesterday; however, in line with the analysts predictions, the currency surpassed the startling milestone of 200 within the first few hours of trading today.

On the first day of talks with IMF mission, Pakistan has indicated that it is willing to take “tough measures” such as increases in POL products and electricity prices, but only in stages, in order to restart the stalled $6 billion fund programme.

The domestic currency has maintained the trend of making and breaking records for the eighth consecutive working day as it cumulatively lost nearly 8% or Rs15 in the last ten sessions.

It is worth mentioning that the country follows a market-based exchange rate where the currency moves are determined by the market forces of demand and supply.

“In the next few days, rupee-dollar parity depends on how talks with the Fund mission unfold,” he said, reiterating that if Pakistan’s delegation successfully convinces the IMF to revive the stalled multibillion-dollar programme then the local currency will stabilise.

Regarding the government’s reluctance on taking tough decisions to meet IMF conditions, the former finance minister said that despite the delay, the international body will show “flexibility” following a statement from the US regarding Pakistan’s economy.

“This time the IMF’s attitude towards the Pakistani delegation will be different because of the US. Pakistan now needs to focus on convincing them [IMF mission] that the country will increase revenues even if they decide against removing subsidies on petroleum products,” he maintained.

A day earlier, a US State Department spokesperson promised Pakistan strong US support for its efforts to restore the economy shortly after FM Bilawal Bhutto-Zardari arrived in New York for a series of meetings including a bilateral one with US Secretary of State Antony Blinken.

Pasha, however, emphasised that if Pakistan moves towards fresh polls this will “negatively” impact the local currency. “Call for fresh elections would create uncertainty in the short run,” he said, adding that Pakistan would also have to stall the IMF programme because the caretaker government does not have enough powers to involve in discussion with the Fund.

“It is important for the new government to present a proper federal budget for the fiscal year 2022-23 which is the second important factor that would play role in stabilising rupee-dollar parity,” he concluded.

Meanwhile, Prime Minister Shehbaz Sharif has taken notice of the continuous depreciation of the rupee against the US dollar. The premier will convene an important meeting today on the economic situation to discuss issues related to preventing the currency from devaluing.

During the meeting, which would be attended by the officials from the Ministry of Finance, Federal Board of Revenue and Ministry of Commerce, the premier will be apprised of the situation regarding imports and exports of the country.

According to the directives issued by PM Shehbaz, relevant authorities will present an implementation report on the decision regarding the ban on importing non-essential items.

A day earlier, the premier had imposed a ban on the imports of luxury and non-essential items including cosmetics and vehicles.

Moreover, sources placed in the Federal Board of Revenue (FBR) had revealed that a summary has been received to increase regulatory duty on some of the items which include machinery, mobile phones, ceramics, steel products, etc.