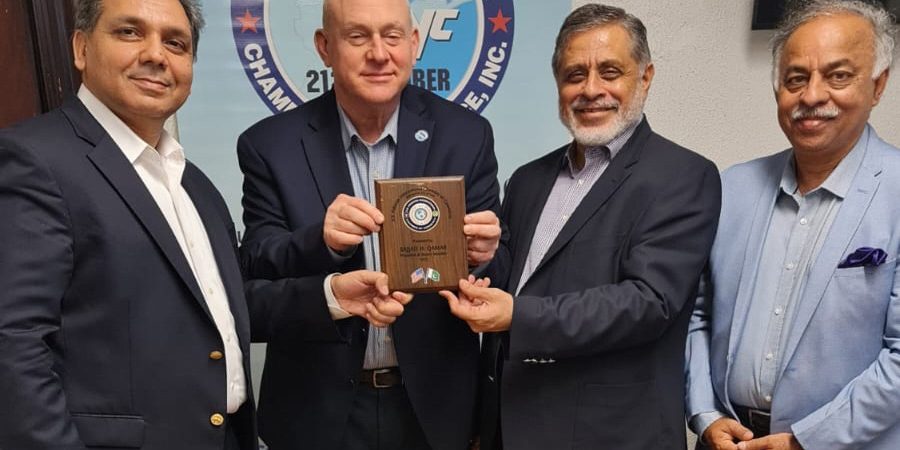 The US-Pakistan International Chamber of Commerce (USPICC) and Greater New York Chamber have affirmed their existing partnership and agreed to hold a single country exhibition in New York on September 23.

This was decided in a meeting between President of USPICC Sajjad Qamar, Zubair Tufail, President of the United Business Group (UBG) and former president of FPCCI,  Secretary-General of USPICC Malik Sohail and President and CEO of the Greater New York Chamber of Commerce Mr Mark Jaffe.

They agreed to work together to promote trade and commerce by exploring opportunities in both countries and to promote networking between both chambers so that their members can benefit from the experience of their partners.

At the occasion, Sajjad Qamar said the United States has been one of the top investors in Pakistan with major investments concentrated in consumer goods, chemicals, energy, agriculture, business process outsourcing, transportation, and communications.

Zubair Tufail said the United States is a very important country; it is one of Pakistan’s largest export destinations and we want to improve bilateral relations. We are seeking deeper commercial ties and want to work with the US to achieve further business enhancements, he added.

Malik Sohail said the US has played a very important role in Pakistan’s social and economic development, improved security, stability, prosperity, and self-reliance.

Meanwhile, Sajjad Qamar said that USPICC has also decided to hold a three-day single country exhibition in the New York, United States from Sept 26 to Sept 28 to promote the economic interests of Pakistan.

The expo will showcase Pakistani products including rice, agriculture products, textiles, chemicals, IT services etc. to attract buyers which will increase Pakistan’s exports to the US.

He said that a delegation from Pakistan comprising leading businessmen led by Muhammad Ahmed, President USPICC, Pakistan Chapter and will also take part in the expo.