The March 31 genocide is our blood memory 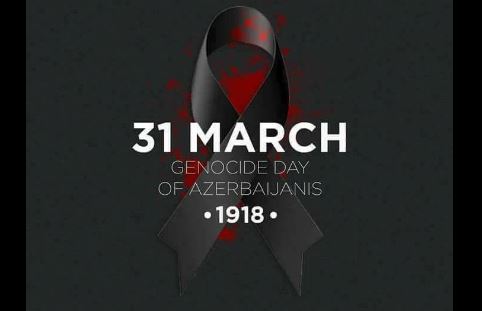 Every year, March 31 is celebrated in the Republic of Azerbaijan and by Azerbaijanis all over the world as the day of the genocide of our people. The March 1918 massacres were a continuation of the massacre of Azerbaijanis by Armenians living under the illusion of a “Greater Armenia”. The genocide of Azerbaijanis was carried out with special cruelty in Baku, Shamakhi, Guba districts, Karabakh, Zangazur, Nakhchivan, Lankaran and other regions of Azerbaijan. In these areas, civilians were massacred, their homes burned, schools, hospitals, mosques and other infrastructure and cultural monuments destroyed. Thousands of peaceful Azerbaijanis were killed solely on the basis of ethnicity.
The scale of the tragedy
Among the innocent victims of the tragedy, women and children stand out. According to the documents of the Extraordinary Commission of Inquiry established by the government of the Azerbaijan Democratic Republic, in March-April 1918, Armenians killed 50,000 Azerbaijanis in Baku, Shamakhi, Guba, Mugan and Lankaran, and drove 10,000 people from their native lands. In Baku alone, about 30,000 Azerbaijanis were killed with special cruelty. Armenians committed genocide in Shamakhi district, killing more than 7,000 people, including 1,653 women and 965 children. 58 villages were destroyed in Shamakhi, 122 in Guba, 150 in the Nagorno-Karabakh region, 115 in Zangazur and 211 in Iravan province.
Today, traces of this horrific genocide can be seen in a mass grave discovered by chance on March 31, 2007 during excavations for construction in the city of Guba. Which cemetery today operates under the name “Genocide Memorial Complex”.
The March genocide was replaced by the Balligaya, Garadagli, Khojaly and Aghdaban massacres
Armenian savagery did not end with the events of 1918 alone. In the 90s of the last century, the Armenians committed the massacres of Balligaya, Garadagli, Khojaly and Agdaban, as in 1918. In those tragedies, it was at least as terrible and cruel as the March genocide. Today, the real facts of these genocides are being revealed.
Mass graves of Azerbaijani civilians detained in inhumane conditions by the occupying Armenians during the First Karabakh War and then brutally murdered were discovered in the territories liberated after the 44-day war. One of such mass graves was recently discovered in Khojavend’s Edilli village. The mass grave discovered in Edilli was very important in terms of revealing the Armenian realities and proving to the world the true nature of this people. Edilli village was in fact the beginning and the future was expected. Expectations came true. Thus, after the Azerbaijani army units took control of Farrukh village of Khojaly region and Dashbashi height around the village, they found human remains while digging a trench there.
The remains, as in the village of Edilli, are believed to have belonged to Azerbaijani servicemen killed during the fierce battles for the village of Farrukh and the Dashbashi Heights during the First Karabakh War. It is possible that there are still mass graves around Aghdam, Fizuli, Khojavend and Shusha. Such mass graves can also be in the territory of Armenia.
The mass grave discovered around the village of Farrukh on the eve of the March 31 genocide shows that Armenian vandalism and barbarism have not changed, although many years have passed.
Turan Rzayev, a political analyst at the Center for International Relations and Diplomatic Studies

« 31st March as last date for renewal of ICCI membership (Previous News)
(Next News) I will be Pakistan’s ambassador to Somalia: Khadija »