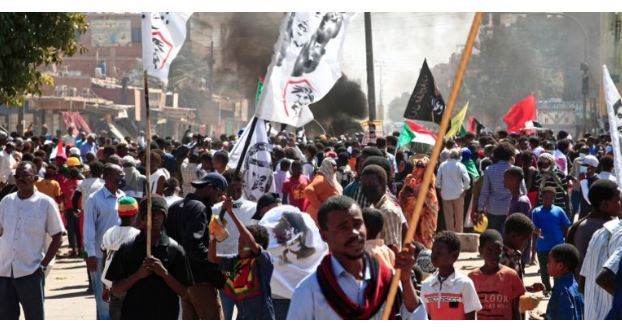 According to the witnesses, Sudanese security forces fired tear gas Monday at thousands of demonstrators calling for civilian rule and justice for protesters killed since last year’s coup.

Demonstrators were heading towards the presidential palace in the capital Khartoum as the tear gas fired at them. Protesters were rallying against the October coup led by army chief Abdel Fattah al-Burhan.

Protesters were seen hurling stones at security forces while others were helping people injured by the tear gas canisters, the correspondent added.

Others set fire to tyres to create burning barricades across roads, or made barriers out of rocks.

At least 79 people have been killed and hundreds wounded in the crackdown on anti-coup demonstrations, according to an independent group of medics.

It came only two days after thousands of pro-military demonstrators rallied against recent UN talks that aimed to help Sudan resolve the political crisis.

On Monday, anti-coup protesters in the city of Wad Madani, south of Khartoum, were seen waving Sudanese flags and carrying posters of people killed in the crackdown.

“No, no to military rule” and “blood for blood”, they chanted, according to witnesses.

Hundreds also gathered in the Red Sea city of Port Sudan, the eastern states of Kassala and Gedaref, as well as in West Darfur state, residents there said.

“The Janjaweed should be dissolved,” the protesters chanted, in reference to the RSF, which grew out of the Janjaweed militias accused by rights groups of atrocities in the western region of Darfur.

Sudan, which was already in the grip of a dire economic crisis before the coup, has seen vital foreign aid cut as part of the international community’s condemnation of the takeover.

The United Stateshad earlier suspended $700 million in assistance to Sudan after the coup, and it has warned that a continued crackdown by the authorities would have “consequences”.

Sudanese authorities have repeatedly denied using live ammunition against demonstrators, reporting that scores of security officers have been wounded and a police general was stabbed to death.

However, Human Rights Watch earlier this month issued a report quoting witnesses who reported that anti-riot police had “used live ammunition” and had also fired tear gas canisters “directly at protesters”, a tactic that can cause severe injury at close-quarters.

On Monday, the Sudanese Professionals Association, which called for anti-coup protests, said the latest demonstrations were “a message to the dictatorship that authority lies with the people”.