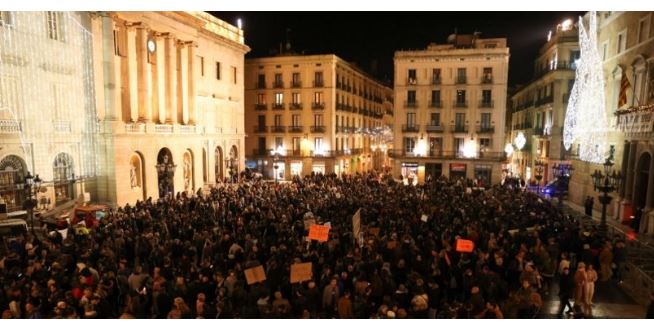 Madrid, DEC 7: Tens of thousands of workers have poured onto Spanish streets in recent weeks, possibly foreshadowing more of what is to come as the country struggles to recover from one of the worst crises in recent history.

“During the lockdown, we were treated like heroes, working every single day to keep producing,” said Veronica Molleda, a dairy farmer who took to the streets of the northern Oviedo city on horseback to protest the working conditions in the agricultural sector.

“But now it’s like we’ve been completely forgotten. The prices of electricity, gas, animal feed, everything have soared, and we aren’t getting more for what we produce. We are on the edge of a cliff, and if things don’t change, no one will be able to come back from it.”

The recent labor movements in Spain have been as diverse as the sectors they have shaken.

In industry, there was a nine-day strike of metalworkers in the southwestern port city of Cadiz marked by violent clashes with police, a general strike in the Galician city of La Marina over ongoing conflicts with companies Alcoa and Vestas as well as a series of protests by workers in the hurting automotive sector.

Outraged farmers hurled their produce at the Agriculture Ministry over prices, hairdressers performed sit-ins across the country in protests of taxes, while cleaning staff, bankers, and a wide range of public sector employees including police and healthcare workers demonstrated their anger on the streets over their current working conditions or pending reforms.

The unrest may just be getting started. Among several planned actions for the months to come, the transportation sector is threatening an indefinite strike beginning on Dec. 20, which could paralyze key deliveries in the days leading up to Christmas. Even Spain’s famed Christmas lottery draw is set to be picketed, as lottery ticket sellers plan to protest stagnant commissions.

Experts are unsurprised that the streets are heating up as Spain begins to recover from the COVID-19 pandemic. With a highly vaccinated population, the country has dropped restrictions that prevent massive protests and attention has shifted from helping companies survive to laying the foundations for the future.

“Big mobilizations tend to occur during times of recovery, not crisis,” Rafael Cruz Martinez, professor of the history of social movements at the Complutense University of Madrid, told Anadolu Agency.

The Spanish economy took an outsized hit by the pandemic due to its heavy reliance on tourism. Its GDP contracted by 10.8% in 2020, and after a disappointing growth this year, the Organization for Economic Co-operation and Development (OECD) predicts that Spain will not recover to pre-pandemic levels until mid-2023.

But the country has a relatively stable government for the first time in years, and with the presence of the far-left Unidas Podemos party in the ruling coalition, it is the most progressive, on paper, in recent Spanish history.

That coincides with the EU economic policy that has turned away from the austerity that marked the response to the 2008 financial crisis and has given tailwinds to “sustainable” structural reform.

“A record amount of money is coming in from the European recovery funds, and different groups of workers, sectors and companies are vying to be the first in line to get it,” added Martinez.

At the same time, the national government is set to pass a set of sweeping measures that would undo much of the labor reform put into place after the 2008 financial crisis, which many critics say increased precarity in the Spanish job market.

“I want everyone in Spanish society to be the protagonists of this essential process of social transformation,” said Yoland Daiz, Spain’s minister of work, in a recent interview with broadcaster Radiocable.

Just like many other countries, Spain stands at a crossroads. Workers, particularly those burnt out from working during the pandemic and who see purchasing power slipping away, want their voices heard. Others, like police protesting a reform of the so-called gag law, are resisting pending change.

In November, inflation in Spain reached 5.6% compared to the same month last year-the sharpest increase in almost three decades, and well above the 4.9% level hit by the eurozone.

Energy and electricity prices, in particular, are bleeding the wallets of businesses and consumers alike. In October, the cost of electricity was up 63% compared to the same month in 2020 and remains close to record highs.

Meanwhile, the average wage in Spain’s private sector went up just 5.1% between 2007 and 2020, according to data from the Spanish Tax Agency. Although that is influenced by several factors, inflation increased 21.7% between October 2007 and October 2021, suggesting the average Spanish resident has lost purchasing power.

In the public sector too, inflation has outpaced any wage gains by 10% since 2010, according to the trade union CSIF.

“Workers feel like they are losing their purchasing power of parity. That’s behind some of the most recent complaints from specific sectors. Prices are increasing sharply and people are worried about their own wages and capacity to buy basic products,” said Marta Martinez, a labor economist who teaches at the Autonomous University of Madrid.

This is the case for the metalworkers in Cadiz, whose strike ended after an agreement was reached to increase wages by 2% per year and potentially more, depending on inflation.

“(The Spanish business community) will sit down with us after it realizes the country is indeed going to mobilize. They may say we’ll turn this winter into hell because there will be a lot of struggle for collective agreements. Salary is our top priority and we will fight on earth, sea and land to get it,” said Pepe Alvarez, secretary general of the UGT, Spain’s largest union, in a recent interview with Spanish daily elDiario.

Meanwhile, self-employed workers like farmers or small business owners say they are barely scraping by now that they have to absorb the skyrocketing prices.

“The situation is really tough for workers and businesses that are facing the same price increases. We believe inflation will be transitory, but if costs keep rising and wages increase, it could become a vicious cycle,” said Martinez.

She added that the tough conditions are only compounded by a market undergoing rapid changes thanks to technological advances. Before COVID-19, jobs were already being lost to innovations like robotization, and the pandemic only acted to accelerate that, she said.

“If more people in sectors like the industrial sector lose work, that will only lead to more inequality.”

Faced with such a stark scenario, she hopes all levels of government will “think twice about where they spend money,” aiming to prop up companies that can adapt to the new market, as opposed to uncompetitive zombie firms, and training, or re-training, a productive workforce.

And while the negotiations between government, businesses and unions drag on, dairy farmer Molleda says inflation means that she is now selling milk to distributors at a loss.

“Every day I go to work, I’m losing money… At this pace, we won’t be able to make it until the spring.”