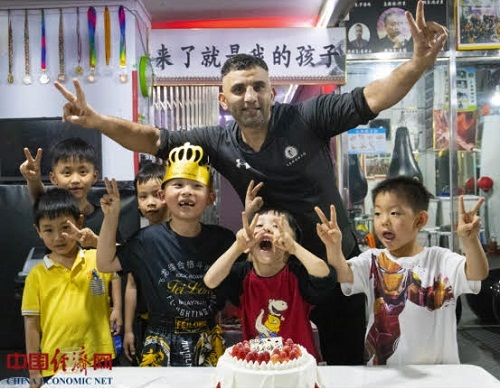 BEIJING, June 4 : “While learning Chinese martial skills or arts one should cultivate fine qualities,”noted Shah Syed Israr Ali, a Pakistani boxing coach based in Shenzhen, China, adding that he wished that his trainees would become capable children.

According to China Economic Net (CEN), Shah started practicing martial arts at the age of 4 and got a black belt in Karate at 11. He was fascinated by different martial arts.

To systematically master Chinese Kungfu, he traveled to China many years ago and started learning it from a martial artist in Shandong, China. “Kungfu mirrors morality,” Shah mentioned.

“Kungfu and morality are handed down from one generation to another,” Shah said. Besides, children are the seeds of the future. The education of children from 4 to 18 is very important. “It’s our bounden duty to build a safe society,” Shah explained.

“Whoever kids come here, I treat them as my own children,” Shah told China Economic Net, adding that Chinese kungfu is not only the means of self defense or mental training but also dealt with the system of morality and ethics.

Mr. Sun Minggao, President of Shandong Chamber of Commerce in Guangdong Province fully agreed with the concept of martial arts and moral education of Shah.