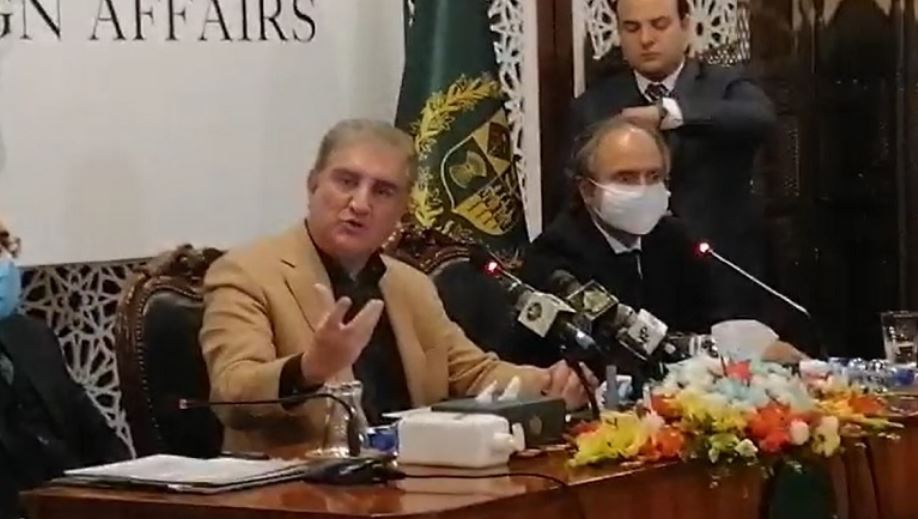 ISLAMABAD, JAN 3: Foreign Minister Shah Mehmood Qureshi on Monday acknowledged that there were “some complications” pertaining to the fencing of Pak-Afghan border but added that the matter was being discussed with the Afghan Taliban government as he blamed “certain miscreants” for blowing such incidents out of proportion.

Qureshi made these remarks during a press conference in Islamabad when he was asked about a video circulating on social media purportedly showing Taliban fighters uprooting a portion of the fence along the Pak-Afghan border, claiming that the fencing had been erected inside Afghan territory. In a separate video being shared on Twitter, Afghan Defence Ministry spokesman Enayatullah Khwarzmi was seen saying that Pakistan had no right to fence the border and create a divide, adding that such a move was “inappropriate and against the law”.

This is not the first time such videos have made the rounds on social media. Last month a video went viral on Twitter that showed Taliban soldiers seizing spools of barbed wire, with a senior official asking Pakistani soldiers stationed at security posts in the distance not to try to fence the border again.

Pakistan has fenced most of the 2,600km border des­pite protestations from Kabul, which has contested the British-era boundary demarcation that splits families and tribes on either side.

The fencing was the main reason behind the souring of relations between previous US-backed Afghan government (led by Ashraf Ghani) and Islamabad. The current standoff indicates the issue remains a contentious matter for the Taliban, despite their close ties to Islamabad.

The lawless mountainous border was historically fluid before Pakistan began erecting a metal fence four years ago, of which it has completed 90 per cent.

When asked about the latest videos showing Taliban forces trying to remove fences, the foreign minister said: “We learned that such incidents occurred in the past few days and we have taken up the issue with the Afghan government at the diplomatic level,” Qureshi said.

The minister, however, downplayed the incident, telling Dawn.com: “Certain miscreants are raising this issue unnecessarily, but we are looking into it and we are in contact with the Afghan government. Hopefully, we would be able to resolve the issue diplomatically.”

While Qureshi said the issue was being blown up by certain miscreants, Taliban spokesman and Afghanistan’s acting information minister Zabihullah Mujahid’s statement seems to suggest otherwise.

Mujahid said there was no need for border fencing by Pakistan as the issue of the Durand Line had not yet been resolved.

“The issue of the Durand Line is still an unresolved one, while the construction of fencing itself creates rifts between a nation spread across both sides of the border. It amounts to dividing a nation,” Mujahid said in a recent interview with a local YouTube channel in Kabul.

“As this issue is still unresolved, there was no need for fencing at all,” he told the Paktiawal Official channel.

Mujahid said the people living on both sides of the border had connections with each other and fencing was like creating a disconnect between them.

“The Durand Line has divided one nation along both sides. We do not want it at all. We want a rational and logical solution to the problem,” the Taliban spokesman maintained.

Like the previous Afghan governments, the Taliban rulers also consider the border as an artificial line, while Pakistan considers the border with Afghanistan as a settled issue and a closed chapter.

The Durand Line agreement was signed between Afghan King Abdul Rahman Khan and British India’s Foreign Secretary Sir Mortimer Durand in 1893. The Durand Line constitutes part of the current border between Pakistan and Afghanistan and not the entire mutual border.

Meanwhile, Afghan Defence Ministry spokesman Enayatullah Khwarzmi told Dawn.com that the same nation lived on both sides of the border and it was “logically not appropriate to create a gulf among a nation.”

A Pakistani security official told that the Taliban claim of Pakistani forces trespassing into the Afghan side of the border to erect the fence was false.

The official was speaking on condition of anonymity following a video making rounds online about the removal of a fence in Nimroz that borders Balochistan.