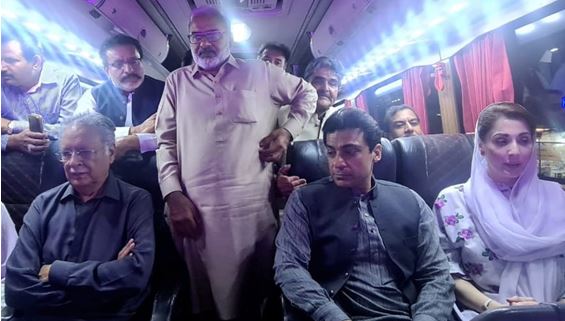 PML-N leader and MPA Rana Mashhood Ahmad Khan has claimed that more than 200 MPAs are present at the hotel for the session.

After the resolution to elect Hamza as the new chief minister was accepted, the session witnessed loud chants, including “chief minister, Hamza Shahbaz”.

The Tareen and Aleem groups have parted ways with the PTI and Prime Minister Imran Khan and decided to support the Opposition’s candidate for the chief minister’s office.

Weeping after witnessing the ceremony, Maryam told Geo News that her tears were the tears of victory, as she prayed for her deceased mother, Kulsoom Nawaz, who died at a hospital in London.

Meanwhile, Hamza, while talking to journalists, said it was unfortunate that the assembly session could not take place today, as he slammed Speaker Pervaiz Elahi for barring MPAs and media personnel from entering the assembly’s building.

“These people are playing with the Constitution […] they cannot understand what is happening with them in Punjab and the Centre,” Hamza told journalists, who are expected to have a tough competition with Elahi for the top slot.

The PML-N leader slammed the PTI government for derailing the economy and worsening the crisis. “The stock market is bullish, while the dollar has reached a historic high.”

Moving on, the Opposition Leader in the Punjab Assembly slammed the PTI-led government for imprisoning Aleem, Tareen, Maryam, and other Opposition leaders for “revenge”.