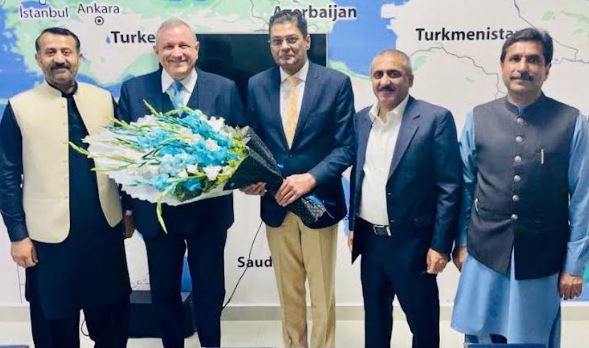 ISLAMABAD, APR 1 /DNA/ – A delegation of Islamabad Chamber of Commerce & Industry led by Muhammad Shakeel Munir, President called on Andreas Ferrarese, Ambassador of Italy in his office and discussed with him the prospects for further improving bilateral trade and economic relations between the two countries. Muhammad Faheem Khan Vice President and Sheikh Amir Waheed former President ICCI were in the delegation.

Addressing the delegation, H.E. Andreas Ferrarese, Ambassador of Italy said that his country wanted to further strengthen trade and economic relations with Pakistan to achieve mutually beneficial outcomes. He said Pakistan could achieve multiple benefits for its economy by developing close cooperation with Italy. He said that more awareness in the Italian business community about Pakistan would help in enhancing trade relations. He said that Pakistan should focus on value addition of its products and Italy can help it with its advanced technology in various fields including marble and tourism.

Speaking at the occasion, Muhammad Shakeel Munir, President, Islamabad Chamber of Commerce & Industry (ICCI) said that the bilateral trade between Pakistan and Italy was not reflective of their true potential and both countries should focus on developing strong business linkages between their private sectors to increase bilateral trade volume. He said that technological cooperation of Italy with Pakistan in textiles, construction, marble, pharmaceuticals, agriculture, processed food, dairy, livestock and other sectors would enable our country to upgrade its industrial capacity and produce value added products for exports promotion. He said that Pakistan has huge reserves of marble & granite and Italian technology would help it to produce value-added marble products and boost their exports. He said that Pakistan was offering incentives to foreign investors and Italian companies should take advantage of these opportunities by exploring JVs and investment in Pakistan.