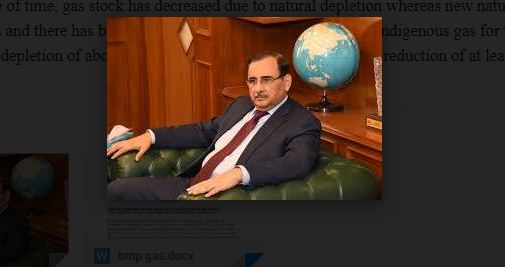 KARACHI – Demanding smooth supply of gas to all industries without any discrimination, the Federation of Pakistan Chambers of Commerce and Industry (FPCCI) ex-president and Businessmen Panel Chairman Mian Anjum Nisar has said that suspension of gas supply to industries, including captive power plants would be detrimental to the national economy.

He was talking to a delegation of various industrial estates, who met him to brief about the worst gas supply situation to the industry across the country. The industrial associations’ delegation observed that the government has also halted the RLNG supply to all sectors and presently no RLNG is available to CNG, fertilizer, and captive power as the government has stopped gas supply to power sector and export industry.

Mian Anjum Nisar stated that suspension of gas to the local industry amidst Covid-19 outbreak would severely affect production process, making it difficult to manufacture life-saving drugs and would directly affect the public.

He said that after closure of RLNG supply to the power sector the government will generate electricity from furnace oil and diesel owing to which the electricity cost will increase manifold against generation by RLNG. Though the captive power plants meant for export industry were stopped for one day in a week as per the decision of cabinet, but the decision will reduce the textile products production by 16 percent. Its impact is expected next month in the form of decline in exports, he said.

Mian Anjum Nisar warned that if the supply of gas to industries was continued to disrupt, the process of industrial production would come to a standstill. In such a case, the increase in imports will lead to deteriorating balance of trade, which will pose a serious threat to the improving economy and will also reduce local industrial production process.

He said that in order to optimally use the scarce available natural gas resource, an exercise was initiated with respect to assessing the usage of gas by Captive Power Plants (CPPs). The CPPs with electricity connection are 976, of which 350 are on SNGPL while 626 are on SSGCL system. Out of the above total 1,211 CPPs, only 227 are cogeneration units which not only generate power for self-consumption but also generate heat energy for their industrial use.

FPCCI former president said that every year it is assured that there will be no gas load-shedding, but on the contrary gas load-shedding has begun, which will have a direct impact on industrial production and exports.

He was of the view that Prime Minister Imran Khan has also repeatedly highlighted the importance of increasing exports, but in practice the industries are suffering from the gas crisis.

Mian Anjum Nisar said that even after closing down the supply to all sectors of economy, the domestic consumers across Pakistan’s main cities of Lahore, Gujranwala, Faisalabad, Sialkot, Rawalpindi, Karachi, Quetta and Peshawar are either experiencing no supply of gas or it is available at painful low pressure.

The BMP chairman said that the fear which the businessmen had been highlighting for the last many months that in Jan 2021, the RLNG crisis will worsen has unfortunately proven correct. The main reason is the government’s failure to arrange the LNG vessels for the first 20 days of Jan 2021 through future trade in Aug-Sep.

He said that natural gas in the country to all bulk consumers including power, fertilizer, industry, CNG, cement and residential consumers is supplied through the extensive network of these two gas utility companies.

With the passage of time, gas stock has decreased due to natural depletion whereas new natural gas discoveries have barely kept pace with the natural depletion and there has been no net increase in the availability of indigenous gas for the last many years. Comparing gas production of last two years, a depletion of about 9.5 percent was witnessed, registering reduction of at least 400mmcfd of gas in the system.