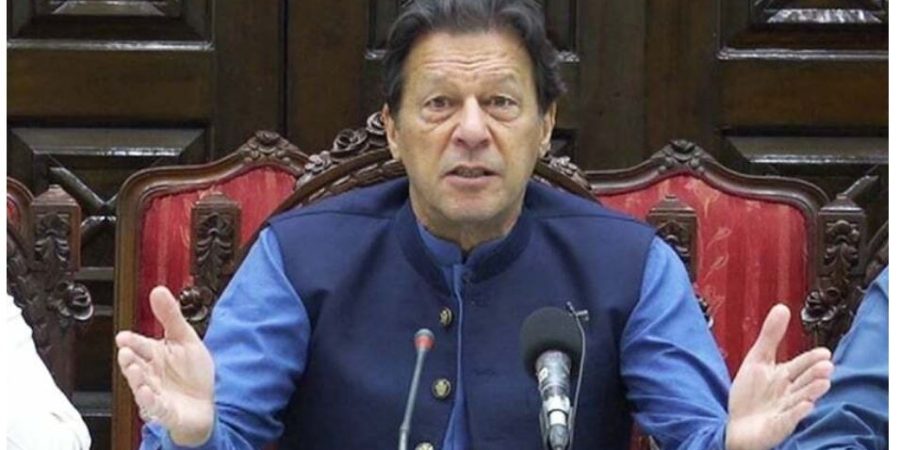 Peshawar, MAY 24: PTI Chairman Imran Khan on Tuesday lashed out at the government for trying to stop the party’s long march to Islamabad, asking the country’s judiciary and ‘neutrals’ to “do the right thing”.

He expressed these views while addressing a news conference in Peshawar, in which he pilloried the government and described its recent moves as “akin to what dictators do”.

His speech came a day after a police crackdown on his party workers, in which a number of workers were allegedly rounded up. A policeman was also martyred the same night in an operation in Lahore. The government and the PTI blame each other for the killing.

At the outset of his press conference, Imran said that this was a “defining moment for the country” which would decide its fate. He asserted that there was no difference between the “fascist government” and the military dictators of the past, saying that both used the same tactics.

He maintained that during the PTI government’s tenure, the then opposition was allowed to stage protests and long marches several times. “They marched several times with the purpose of ousting the government but did we resort to these methods?”

Imran lashed out at the government for conducting late-night raids in Lahore and for barging into the homes of innocent citizens. He questioned why the government was suddenly resorting to such tactics, calling on them to highlight any instance in the past where he had ever broken the law.

The PTI chairman said that the country was looking towards the judiciary, telling them that this was their “trial”. “The country is going to look at your decisions,” he said, asserting that the long march was a peaceful protest and the party’s democratic right.

He went on to say that the PTI had a right to stage a protest against the “imported conspiracy”. “Did we protest when Bilawal staged a long march? Did we arrest him? Fazlur Rehman also staged a march […] we said we would help them.”

Addressing the judiciary, he asked whether it would allow such harassment and raids to take place. “If you allow this, then the credibility of the judiciary will cease to exist. It would mean that there is no democracy in Pakistan.”

He asserted that “staying neutral” was no longer an option. “You have to decide which side you are on. God has not given us permission to walk in the middle, that means that you are helping the criminals.”

Addressing “those who call themselves neutral”, he said that they had taken an oath to protect the country’s independence and sovereignty. “You need to understand that the public is looking at you, and you will also be judged. You will be equally responsible if the country goes towards destruction.”

He asserted that the only solution going forward was to conduct early elections. “There is no other solution,” he said, expressing the fear that the country was headed down the path of Sri Lanka, which is currently in the throes of an economic crisis.

The government wasn’t interested in serving the country and only wanted to end their corruption cases. “Therefore, I want to give a message to everyone: Neutrals and lawyers, this is a defining moment.”

Commenting on last night’s raid at the home of retired Justice Nasira Iqbal, he said: “Her house was raided last night […] I want to ask the neutrals and the judiciary, the scenes that you are witnessing, what kind of government can do this? Not a democratic one.”

He asserted that he would lead a rally from Khyber Pakhtunkhwa to Islamabad tomorrow, saying that for him this was no longer about politics but was a “jihad”.

Imran alleged that the current government had been brought into power by the United States because it would bend over backwards for them. “All of their assets are abroad, they are slaves […] 400 drone attacks were carried out when Zardari and Nawaz were in government but they did not say a single word.”

He called on his supporters to “leave fear behind” as the government was trying its best to intimidate the PTI. “Will we accept the government of thieves because we fear going to jail? How many people will they send to jail, do they have that many officials? They can’t do it. You don’t have to be scared of anything.”

Imran said that even though the government had closed down Islamabad and Rawalpindi, his supporters should still leave their homes for the long march. “They don’t have that many police officials to carry out arrests.”

He also claimed that a “criminal” had been posted as the Islamabad police chief and questioned how the Punjab police force could follow the orders of Chief Minister Hamza Shehbaz when cases were pending against him. “Action will be taken against the bureaucracy if you follow unlawful orders,” he warned.

In his message to the youth, Imran said that the country’s future was at stake. “There is no future if these leaders stay. There are two paths; one is destruction and the other is real independence,” he said, reiterating that he would set out tomorrow for the long march with his caravan.

“If someone wants to stop us, do it. But no one can stop this sea of people.”