IICR organises conference “Global Politics in the age of Disinformation: Where Pakistan Stands” 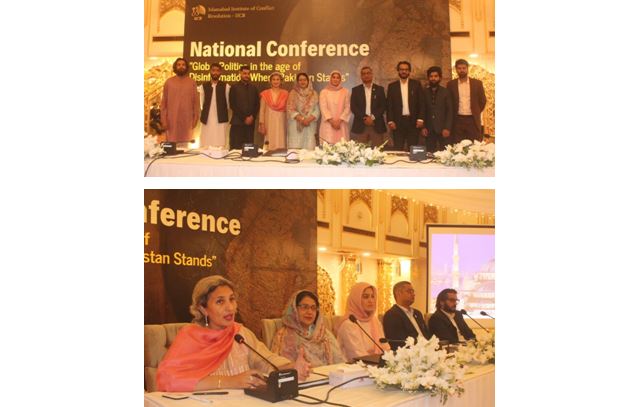 ISLAMABAD, APR 16 /DNA/ – A national conference titled “Global Politics in the age of Disinformation: Where Pakistan Stands” was organised under the auspices of Islamabad Institute of Conflict Resolution (IICR), an Islamabad based think tank.

In her opening remarks, Ms Sabah Aslam expounded the spread of misinformation and disinformation as part of the fifth generation warfare. She also highlighted how the information has been weaponized and Pakistan battles the challenge of disinformation at the hands of west and its eastern neighbour India.

The Keynote address was made by Mr Hassan Aslam Shad, during which he underscored that the disinformation lawfare is the most sinister form of lawfare. He further said that the people inadvertently become vehicles for dissemination and transfer of disinformation, making the entire state vulnerable. He concluded by recommending that Pakistan should develop a mechanism to counter disinformation by establishing a robust mechanism of state machinery to curb fake news and disinformation.

Mr.Shahid Raza during his address explained the history of disinformation operations. He termed the information operations as the extensions of the hybrid domain, working in tandem with the kinetic operations. He further underlined the threat posed by India’s state-sponsored propaganda targeting Pakistan in more than 90 countries.He further added that multiple international networks carry out sophisticated attacks and try to sow seeds of hatred within Pakistan’s close allies and friendly states, particularly Turkey for its stance on Kashmir.

Mr Noaman Abdul Majid explained the effects of disinformation on a state’s economy. He highlighted that disinformation has far-reaching consequences leading to almost crippling of trades to even causing substantial harm to human lives. He concluded by recommending that legislations be passed so as to enable swift action to curb disinformation and misinformation.

Prof. Dr Salma Malikduring her address accentuated that disinformation is targeted at the brains i.e. the intelligentsia, rather than the body i.e. masses. She also underscored that an honest narration of history is a viable tool for nation-building, rather than a socially engineered or selective account of history.

Prof. Dr Amna Mahmoodurged the government of Pakistan to mass sensitization campaign to limit the menace of fake news, misinformation, and disinformation. She further said that, to begin with the students from universities should be involved in counter disinformation dialogues and campaigns.

Mr Nasir Qadri Advocate during his address shed light on the vicious triangle of Misinformation, Disinformation, and Hate Speech (MDH) which he referred to as prominent types of ‘weaponized’ information.He termed MDH as an increasing challenge in Pakistan, however considering the same not being novel in Pakistan.

He recommended that there should be a clearer understanding of the main barriers to and challenges in incorporating consideration of MDH, and a robust policy framework must be enacted to curb this vicious triangle.