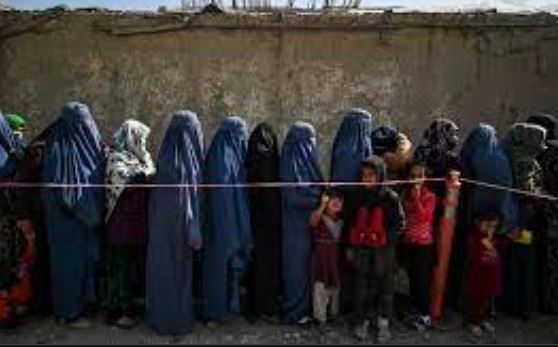 Ameer Khan starts his long day at 6 o’clock in the morning with the school preparations. He attends a shelter school established by a non-governmental organization in the premises of Kachi Abadi (Slum area), in the outskirts of Islamabad, the capital of Pakistan.

Born in an Afghan refugee family living in Pakistan, he and his parents don’t know their citizenship status.

Uncertainly and fear increases among Afghan refugees living in Pakistan, whether legally or illegally, after Taliban’s takeover of the country recently. The hopes of returning back to Afghanistan have almost ended with the recent developments in the Kabul as the life of a common man further devastated after the world pulled out their hands from helping the country.

Ameer Khan, 8, after attending school helps his father in the afternoon to sell vegetables on a hand-driven cart in the adjacent areas. Talib Jan doesn’t know the status of his son as they don’t have any documents with them.

Talib Jan said they left Afghanistan to protect their lives. He along with his wife and two children crossed to Torkham Border in Khyber Pakhtunkhwa. He describes his departure saying they navigated watchful Taliban to cross into Pakistan.

The large-scale displacement of Afghan refugees was triggered by the unrest following the Soviet invasion of Afghanistan. It was sustained by the later advent of the Taliban regime and the enduring conflict and political instability. By the end of 1980, there were more than four million refugees in Pakistan, with that number growing over the next five years.

Today, Pakistan is hosting 1,435,445 registered Afghan refugees, making it the third largest host country of refugees in the world. Practitioners estimate that there are approximately one million more unregistered Afghan nationals in the country. The majority (68 percent) live in urban areas, with 32 percent living in “refugee villages,” the local, informal, name for refugee camps. It is one of the most protracted refugee crises in the world, and one that receives little support from the international community.

Some arrived as children, grew up in Pakistan, married, and had children of their own who have never lived in Afghanistan. Others have arrived in the decades of turmoil in Afghanistan since then, seeking security, employment and a higher standard of living.

Islamabad is watching worriedly to see whether more refugees like Talib Jan and his family come pouring over the border as the humanitarian crisis is increasing in the country with every passing day.

Pakistani officials are trying to keep the flow of refugees under strict control at Torkham, the dusty border crossing about 140 miles east of Kabul. Only small groups of people crossed the border, where only Pakistan citizens and Afghans with visas are allowed to cross.

The recent movement of refugees may have negative implications for the Afghans already in Pakistan who have been used as a political bargaining chip for decades.

The skepticism had left Afghan refugees in a state of uncertainty. Though Pakistan’s law allows those born there to get citizenship, the claims of Afghan children are generally not recognized. Prime Minister Imran Khan pledged to recognize their citizenship after he became prime minister in 2018, but he backed off following a backlash from politicians and the country’s powerful military.

Human Rights Watch (HRW) said the biggest fear of Afghan refugees is deportation. In 2016, the Pakistani authorities forced more than 500,000 people to return to Afghanistan. The group warned that the move risked adding to a population of hundreds of thousands of people in Afghanistan rendered essentially homeless by poverty and conflict.

The Taliban’s vengeful ways add to the risks. While the country’s new leaders have tried to strike a moderate tone, reports of reprisals against former members of the security forces and other Taliban opponents have trickled out of the country.

Wali Khan, another Afghan refugee living in the slum for years, said the police start creating problems with changing political atmosphere at the highest level between Islamabad and Kabul. He said Afghans living in the country are being treated in hostile way by the authorities after the Peshawar APS massacre.

Wali Khan, a taxi driver, who had been residing with his family in the slum area of Islamabad since three decades, said he was asked many times to leave the country. He, however, said he doesn’t have any other option except living in exile.

In the short-term, the current Afghan government may have financial resources to soften themselves from international sanctions. However, this will not extend to the Afghan people, who will be the ones to suffer the most and potentially for many years to come, especially if the Taliban isolate them in an exile state. (Names changed for the safety of people)