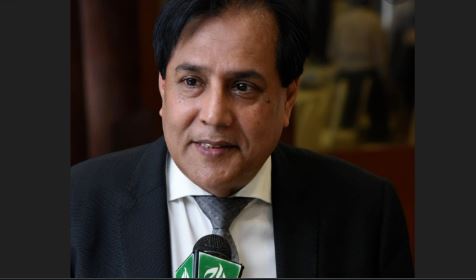 Karachi; The United Business Group for FPCCI have rejected the Federation of Pakistan Chambers of Commerce and Industry (FPCCI) President Mian Nasser Hyatt Maggo Statement that the incumbent federal government has no capability to make timely decisions.
UBG office bearer Sahibzada Mian Usman Zulfiqar and FPCCI former Executive Committee official said Federation of Pakistan Chambers of Commerce and Industry leadership have made irrelevant and political remarks on the Federal government due to last week of the election compaign of the FPCCI elections.
He stated that President Federation Expressing disenchantment over the ongoing gas crisis, and the FPCCI President also asked the Federal Minister for Energy Hammad Azhar to resign from his position, if he fails to make timely decisions; but he doesn’t know that stay order issued by the honourable high court on the provision of gas to priority areas and obviously government could not provide the fuel source through expensive imports beyond a limit.
Regarding establishment of the Policy Advisory Board (PAB) at FPCCI, Usman said PAB has published only three research-based papers so far  that include “Prospects of Cryptocurrencies a context of Pakistan which is ban in Pakistan by the State Bank of Pakistan.
Similarly the current leadership of FPCCI failed to address the issues of Baluchistan in a true manner and neither put their efforts to allocate even a single plot for regional office in quetta nor regularise the final approvals from the CDA for the Islamabad office.
Further the incumbent SVP of the FPCCI made whole year with photo session only and not a single issue be solved with the Punjab government or with other allied departments despite whole year he worked from Lahore Regional Office.
“I failed to understand what are the performance indicators of the incumbent FPCCI leadership except press talks and humiliate the government. Is this the agenda of the Businessmen Panel? he questioned”..
He also said all Chambers of Commerce and Industry and affiliated trade associations of South Punjab unanimously enblock announced to support the all candidates of United Business Group panel in the forthcoming annual election of Federation of Pakistan Chamber of Commerce and Industry (FPCCI).
Tanvir Ahmad Sheikh, former president FPCCI hosted a grand reception in honour of UBG Chairman Iftikhar Ali Malik, patron-in-chief SM Muneer, presidential candidate Dr Nouman Idris Butt, SVP candidate Hanif Gohar and others which was overwhelmingly attended by a large number of nominated members executive committee of chambers and general body of associations hailing from South Punjab.
Similarly the Sindh Chambers also with the UBG because they know Businessmen Panel did nothing for them.
The UBG office bearer has further said that continuous increase in mark-up rate, devaluation of rupee against dollar; this situation could become alarmingly dangerous if immediate steps are not taken to curb the widening gap between imports and exports.
At present the wheel of the national economy is not moving in the right direction, people are worried, the business community is also worried while the purchasing power of the common man is being severely affected and becoming unbearable, in these circumstances Prime Minister Imran Khan have to take right steps to come out of this critical situation.
The rupee has crossed Rs178 against the dollar, which is causing a new storm of inflation in the country. It is feared to escalate further.
He also appealed to the Prime Minister Imran Khan to take immediate action realising the gravity of the situation as the appreciation of the dollar has led to fears that the rupee will depreciate further which will affect not only national security but also the economy.