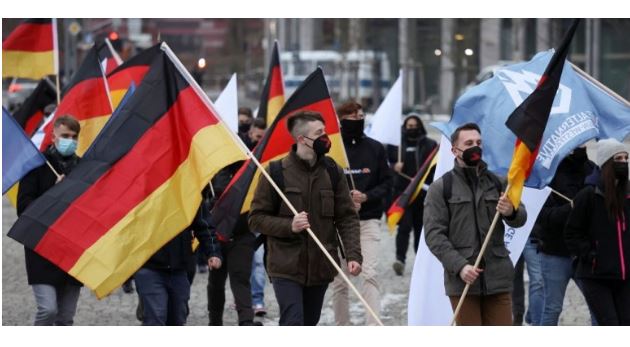 According to police reports, 14 officers were injured during protests against coronavirus policies in central Germany. Following calls on social media, up to 1,000 people had gathered in the town of Greiz in the state of Thuringia on Saturday, the police said on Sunday.

They formed a procession at a bridge in the town, which was stopped by the police. Protesters tried to break through the police cordon.

The police, who were deployed with a large number of officers and also had a water cannon at the ready, then used pepper spray.

In video sequences circulated on Twitter, protesters could be seen wrestling with the police in an attempt to break through the cordon.

A photographer from dpa reported an aggressive atmosphere.

Firecrackers were set off and a police officer was hit in the foot with a bottle. A Thermos flask was also thrown towards the police.

Two of the injured police officers were temporarily unfit for duty, the police said. One injured officer was temporarily treated in hospital.

The police identified 207 protesters, issued 108 orders to leave the area and initiated 44 criminal proceedings. In addition, 47 proceedings for administrative offences were under way.