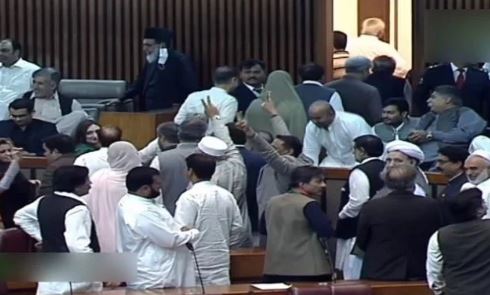 ISLAMABAD: The PTI parliamentarians walked out of the National Assembly after their candidate, Shah Mahmood Qureshi, announced to boycott the polling process.

The session is now is underway with MNA Ayaz Sadiq in the chair, two days after the lower house of parliament voted in favour of removing Imran Khan from office, following a nearly 14-hour standoff between the Opposition and Khan’s ruling party that started on Saturday morning.

The Monday session formally started after a brief delay with a recitation of the Holy Quran and naat, with NA Deputy Speaker Qasim Suri in the chair.

The Opposition’s joint candidate and PML-N President Shahbaz Sharif is likely to be elected unopposed as PTI decided to boycott the session shortly before it started, with resignations of PTI lawmakers continuing to pour in.

At the outset of the session, Suri said that voting has already been done on the no-trust motion [against Imran Khan] and there has been enough debate over the ruling he gave on April 3, which blocked the no-trust vote against Khan.

“Complying with the court’s orders is mandatory for everyone, but I want to put the reasons and basis of my ruling before you.

“I made the decision as a patriotic Pakistani, as a guardian and speaker of the NA,” he said.

“I want to tell you that the foreign cable was deliberated over during the meetings of the federal cabinet, the PCNS, NSC and it was agreed that the no-confidence motion against Khan is a foreign plot,” he said.

Suri went on to say that the last cabinet meeting that was held on April 9, 2022, decided to declassify the foreign cable. He said that the cable was then received by former NA speaker Asad Qaiser, who closely read it.

Suri then flashed the “cable”, saying that he also received it as the deputy speaker.

“In this cable, Pakistan has been openly threatened.”

Suri reiterated that the cable was received before the motion of no-confidence was submitted against Khan.

He asked if it was Khan’s fault that he talked about an independent foreign policy or spoke for the honour of Prophet Muhammad (PBUH), or fought the case against Islamophobia.