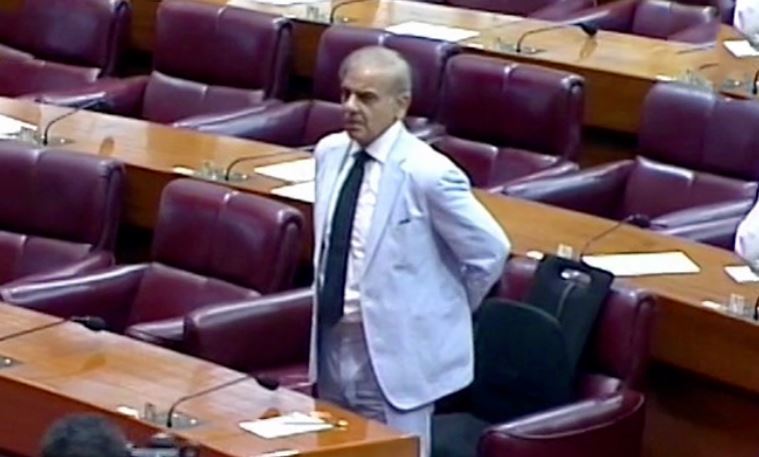 ISLAMABAD, APR 11: PML-N President Shehbaz Sharif was elected as the 23rd prime minister of Pakistan after 174 lawmakers voted in his favour as Pakistan Tehreek-i-Insaf MNAs boycotted the election.

Earlier, PTI MNAs had walked out of the halls, with Shah Mahmood Qureshi — who was the party’s candidate for the top slot — announcing that they would be resigning en masse from the NA.

PML-N’s Ayaz Sadiq presided over the session after Deputy Speaker Qasim Suri his conscience did not allow him to conduct the session.

Announcing the results, Sadiq reminisced that he had also chaired a session during which PML-N supremo and Shehbaz’s elder brother was elected as the premier.

“And today, I have the honour of chairing the session for Shehbaz Sharif’s election,” he said.

As soon as Sadiq announced the result and said Shehbaz was the new prime minister of Pakistan, lawmakers began shouting slogans in favour of Shehbaz and Nawaz.

The speaker asked Shehbaz to move to the seat of the prime minister in the house and he shifted to the treasury benches amid cheers, with other members of the former joint opposition following suit.

The development comes two days after an unceremonious end to Pakistan Tehreek-i-Insaf (PTI) chief Imran Khan’s tenure as the country’s chief executive through a no-confidence vote.

After taking the chair of the speaker, Sadiq read out the rules and procedure for the election of the prime minister and asked for the bells to rung for five minutes so that all lawmakers could come inside the halls before the voting began.

He said after the bells stopped ringing, the assembly’s entrances and exits would be locked and would remain so until the voting concluded.

Thereafter, Sadiq read out the names of the contenders, PML-N President Shehbaz Sharif and PTI’s Shah Mahmood Qureshi. In a slip of tongue, he named PML-N supremo Nawaz Sharif as one of the contenders initially and quickly corrected himself, clarifying that he meant to say Shehbaz.

“I apologise Shehbaz sahab, Nawaz’s name remains in my heart.”

Sadiq then asked the lawmakers supporting Shehbaz to proceed to lobbies on his left side for voting. Similarly, he asked those who wanted to vote in favour of Qureshi to proceed to the lobby on his right side to cast their votes.

The voting has ended and the result sheet has reached the NA secretary who is counting the votes.

The NA session for the election of the prime minister today began with the recitation of the Holy Quran.

After the recitation, Deputy Speaker Qasim Suri, who was initially chairing the session, explained his rationale behind his contentious ruling to dismiss the no-confidence motion against erstwhile prime minister Imran Khan on April 3.

“The ruling was declared unconstitutional by the court … and we all are obliged to respect the court. But I want to tell you the reason behind my ruling,” he said, adding that he had taken the decision “as a responsible Pakistani and deputy speaker of the NA”.

He then referred to a communique, which purportedly contained evidence of a foreign conspiracy to topple Imran Khan’s government, saying that cable was discussed in the federal cabinet, a meeting of the National Security Committee and a meeting of the parliamentary committee for security.

“And it was proven that the no-confidence motion [was linked] to a foreign conspiracy,” he said.

Suri added that on April 9, it was decided during a cabinet meeting that the cable would be declassified and sent to then-NA speaker Asad Qaiser by the government.

“Asad Qaiser read and reviewed it [the cable],” he said. He then held up a piece of paper, saying that he had the cable with him. In the letter, he continued, an “open threat” had been made to Pakistan.

He added that the communique was sent to Pakistan before the no-confidence motion was submitted on March 8.

The cable, he continued, stated that in case of the failure of the no-confidence motion, Pakistan would have to face dire consequences.

The deputy speaker went on to question, “Was talking about an independent foreign policy, independent economy … and fighting the case of Islamophobia Imran Khan’s fault?”

“Was he punished because he refused slavery?”

The deputy speaker announced that he was sealing the cable and sending it to Chief Justice of Pakistan Umar Ata Bandial.

Before giving the floor to PTI’s Shah Mahmood Qureshi, he said his April 3 was in line with the oath he had taken as the deputy speaker and the Constitution. “I did it to stop a regime change at the will of another country,” he said.

But, he added, “I accept the Supreme Court’s decision on the matter.”

He appealed to MNAs to think about the matter and apologised for hurting anyone’s sentiments.

Qureshi began his speech by noting that a constitutional process would reach its conclusion today.

“An election will be held, in which one side will be successful and another will be freed,” he said. “Today, the nation is at a crossroads. It has to choose between the path of independence and the path of slavery.”

He then thanked Imran Khan and his party for showing confidence in him and nominating as the candidate for the prime minister’s slot.

Qureshi continued that today, there was a cohort driven by a single ideology on one side and a coalition of parties, which was “unnatural” in the PTI’s view, on the other.

PML-N President Shehbaz Sharif — who is the former joint opposition’s candidate for the prime minister’s slot — and PTI’s Shah Mahmood Qureshi were in the race to become the country’s new prime minister.

However, after the PTI boycotted the elections and walked out of the assembly, Shehbaz is the lone contender for the prime minister’s slot and will be elected unopposed.

According to the NA agenda issued by the house’s secretariat for today, the session for the prime minister’s election will begin at 2pm.

The premier’s election is the only item on the agenda — apart from the recitation of the Holy Quran and a Naat, which marks the commencement of every NA session — stating that the house would convene to vote for the new leader of the house “as required by Article 91 of the Constitution of the Islamic Republic of Pakistan, read with rule 32 of the Rules of Procedure and Conduct of Business in the National Assembly, 2007”.

Former prime minister Imran Khan arrived at Parliament House ahead of the session for the election of a new premier to chair a meeting of the party’s parliamentary committee.

When asked to comment on protests held across the country by PTI supporters last night, he smiled and said: “God is the one who gives respect.”