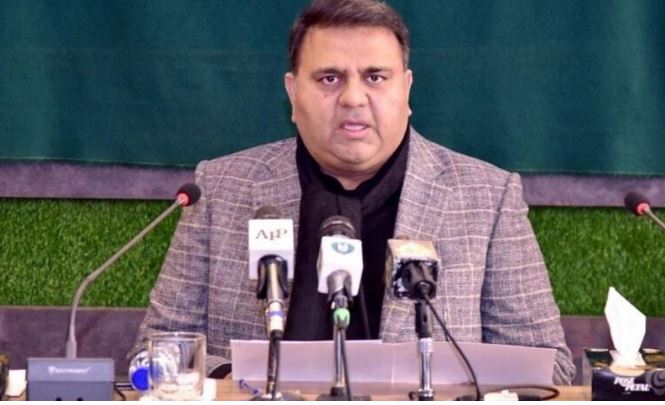 Says cabal of crooks pursuing self-serving agenda, nothing to do with country’s interests

ISLAMABAD: Coming down hard on the imported government for pursuing self-serving interests, the Pakistan Tehreek-e-Insaf (PTI) Central Senior Vice President Fawad Chaudhry said that NAB bill amendment was an NRO-2 for Sharif and Zardari families as corruption cases amounting to Rs. 1100 billion would go out of NAB jurisdiction after the amendment. Speaking at a press conference here, he said that NAB bill amendment would benefit Panama cases as well as the coteries of these two families.

Fawad said that PTI celebrated ‘Black Day’ against NAB law amendment on Monday, because cabal of crooks and NAB-wanted people did the amendment to exonerate themselves of mega corruption cases.He said that under the amendment, assets in the name of wife, children or anyone else would not be investigated.Fawad Chaudhry said that Sharif and Zardari families ended their corruption cases after getting first NRO from Pervez Musharraf and then they got the second NRO now by ending the independence of the well-performing NAB a powerless entity, which recovered Rs. 487 billion in three and a half years, as it was brought under interior ministry.

He lamented that Zardari and Bilawal cases as well as Maryam Nawaz’s AvenField reference case would come to an end with amendment in NAB rules, adding that since it was bureaucrats’ decision; therefore the said amendments would also benefit them the most.Moreover, Fawad said that the amendment would benefit the Ashiana housing case involving Federal Minister Khawaja Saad Rafique, besides benefiting Raja Pervez Ashraf and perhaps Khaqan Khaqani Abbasi too.Fawad revealed that the then opposition, now in the government, tried to blackmail PTI government and conditional their cooperation for FATF with amendment in NAB law, which Imran Khan rejected straightly.He thanked the public for huge participation in country-wide anti-inflation on Imran Khan’s call despite heavy downpour, rejecting the imported government.Fawad said that there was only two forces in the country that could keep the nation intact i.e., Imran Khan and Pak army.

He said that Imran Khan was a symbol of uniting Pakistan and PTI was the only mainstream political force in the country while the rest of the political parties shrunk to some specific localities.Lashing out at the Finance Minister Miftah Ismail, he said that Miftah was seeking the US ambassador’s assistance to strike a deal with the IMF, clearly reflecting the incompetence of the imported government, which did not understand what to do.He went on to say that the inapt and crooked rulers were scapegoating the IMF to hide their incompetence, mismanagement and flawed policies, advising them to stop blaming PTI for the runway inflation, as the PTI government not only kept the price hike under control but provided them maximum relief.Fawad stated that their bad governance and expertise badly exposed in the last few months because their agenda was not for the betterment of Pakistan but to make necessary constitutional amendments to get their names clear from corruption cases, which was evident from Federal Minister Khurram Dastgir’s interview.He expressed his apprehension that the corrupt and self-centered politicians would not hesitant to create Sri Lanka-like crisis in Pakistan for protecting and safeguarding their own interests.