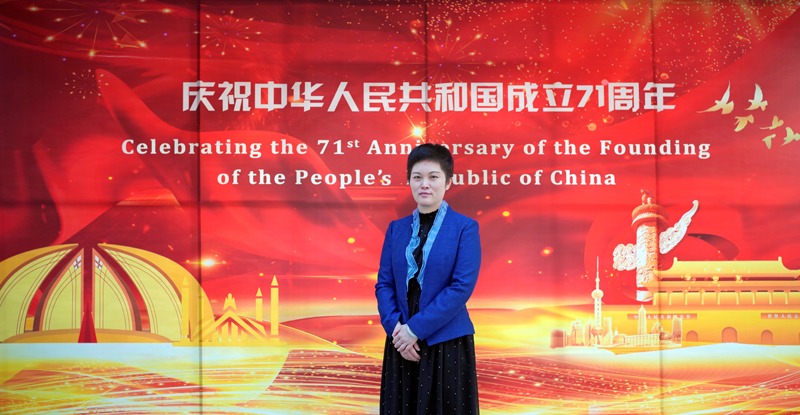 The resilience of Pakistan China friendship can be gauged from the fact that even during the global pandemic, it stood firm like a rock. The people of both countries supported each other during the pandemic by extending solidarity and medical support. The foreign ministers of both countries held a meeting on the eve of the second strategic dialogue and reached an important consensus on the comprehensive development of China-Pakistan relations. Historically, the relations between the two countries have been friendly and in the future, China hopes to further cement this relationship with mutual trust and dignity. Next year i.e, 2021 will be the 100th anniversary of the founding of the Communist Party of China and the 70th anniversary of the establishment of diplomatic relations between China and Pakistan. China is firm to take CPEC forward and is working with Pakistan to promote the high-quality development of CPEC.

2020 is a remarkable year to China. The biggest goal for China is win the battle against poverty and build a Moderately Prosperous Society in All Respects set up the Communist Party of China (CPC) and the Chinese Government. It is a long journey since the founding of the People’s Republic of China 71 years ago an important step in realizing the China Dream. We have the full confidence of achieve it under the strong leadership of President Xi Jinping.

Over the past 71 years, the CPC and the Chinese government have always regarded the people’s yearning for a better life as our goal, leading the people of the whole country to stay true to their original aspirations, work hard, and develop China from a weak and poor populous country to the world’s second-largest economy. China has successfully lifted 760 million poor people out of poverty. It has become the first developing country to achieve the United Nations poverty reduction goal and contributes more than 70% to global poverty reduction. In 2019, China’s total economy exceeded 99 trillion yuan (14.4 trillion US dollars), and the per capita GDP exceeded 10,000 US dollars. Since 2017, China’s economy has contributed more than 20% of the world’s economic growth, becoming an important engine for world economic growth. The Chinese nation, with an entirely new posture, now stands tall and firm in the East.

2020 is an extraordinary year witnessing the global community fighting against the COVID-19 pandemic. China suffered a lot. Under the strong and decisive leadership of President Xi Jinping, the whole nation adopted the strictest, most comprehensive and thorough prevention and control measures to effectively curb the spread of the epidemic in a short time. We are proud to quickly achieved the success in the people’s war against the coronavirus and take the country back to order. China’s GDP grew by 3.2% in the second-quarter, and exports rose by 10.4% in July. China became the first major country to overcome the crisis and the first major economy to recover from the pandemic.

China is also actively contributing to the global fight against COVID-19. We have carried out international anti-epidemic cooperation within our capacity, donated US$50 million to the WHO, sent 29 medical expert teams to 27 countries, and provided assistance to 150 countries and 4 international organizations. President Xi Jinping announced that China will provide US$2 billion over two years to help with COVID-19 response and with economic and social development in affected countries. COVID-19 vaccine development and deployment in China, when available, will be made a global public good.

2020 also witnesses the world undergoing profound changes and challenges, something unseen in a century. As a responsible major country, China will continue to adhere to openness, cooperation, win-win, and inclusive development, establish a “dual circulation” development pattern in which domestic economic cycle plays a leading role while international economic cycle remains its extension and supplement. With this new pattern, China’s door will open wider to the world. China will continue to work for the improvement of global governance based on consultation, cooperation and shared benefits. We will continue to take concrete actions to protect the diversity of civilizations and promote exchanges and mutual learning between development models. We will work with other countries, including Pakistan, to jointly uphold the trend of peace and development of our world.

In this year, China-Pakistan relations stood the test of COVID-19 and have become even stronger with greater mutual trust, cooperation and friendship. The governments, people and societies of China and Pakistan strongly supported each other in fighting against COVID-19. In March, President ArifAlvi paid a visit of solidarity to China. In August, State Councilor and Foreign Minister Wang Yi held the second strategic dialogue with Minister of Foreign Affairs Mahmood Qureshi and reached important consensus on the comprehensive development of China-Pakistan relations. The construction of the China-Pakistan Economic Corridor is advancing steadily, and has made outstanding contribution to Pakistan’s resilience against the challenge. Under the leadership of Prime Minister Imran Khan, the domestic epidemic situation in Pakistan has been greatly improved. The unity and tenacity shown by the Pakistani government and people is commendable. We firmly believe that Pakistan will eventually overcome the epidemic and rejuvenate the economy. We will continue to provide support and assistance to our iron brothers and sisters.

Looking back, Pakistan is the first Muslim country to formally establish diplomatic relations with New China. China-Pakistan relations are an outstanding example of relations between countries with different social systems and different historical cultures. No matter how the international situation changes, China-Pakistan relations have been developing in a healthy and stable manner, and the two sides have always firmly supported each other on issues concerning each others’ core interests. When President Xi Jinping visited Pakistan in 2015, the two countries announced the establishment of an all-weather strategic cooperative partnership, pushing China-Pakistan relations to a higher level. Since 2018, Prime Minister Imran Khan has visited China three times, and President Xi Jinping have met Prime Minister Imran four times on bilateral and multilateral occasions. Our relations grow steadily under the steer of the leadership of the two countries.

Looking forward, in 2021, we will commemorate the 100th anniversary of the founding of the Communist Party of China and the 70th anniversary of the establishment of diplomatic relations between China and Pakistan. We are ready to work with Pakistan for a closer China-Pakistan Community of a Shared Future, to boost the high-quality development of the CPEC, jointly safeguard our common interest, maintain the momentum of peaceful development in the region, and create a better future for China-Pakistan relations!