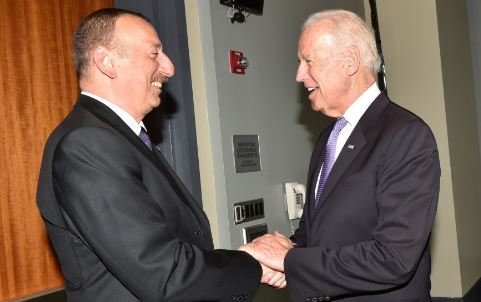 President of the Republic of Azerbaijan Ilham Aliyev has received President of the Republic of Turkey Recep Tayyip Erdogan. Stressing that this year marks the 30th anniversary of the establishment of diplomatic relations between the United States and Azerbaijan, Biden said, “My administration will continue to support democracy, peace and progress in the South Caucasus”.

It is an important event that Biden congratulates President Ilham Aliyev and the people of Azerbaijan on the occasion of Novruz. First of all, this is an indicator of the value that the official Washington has given to Baku. The fact is that there are about 200 countries in the world today, and the United States does not send congratulations to the president and people on the official holidays of all countries. One of the specific features of traditional Anglo-Saxon diplomacy, the holiday is an indicator of the value given by the congratulatory country to the country addressed.

A number of points draw attention to Biden’s congratulatory letter:

First, along with the text of the letter in the English language, the expression Novruz holiday is written in the Azerbaijani language. Although it seems a small detail, it can be regarded as a gesture of the world’s superpowers to Azerbaijan. Washington shows once again that it is interested in cooperation with Baku, and this diplomatic correspondence manifests itself in the most delicate way.

Secondly, Biden said in his letter that “my Administration will continue to support democracy, peace and prosperity in the South Caucasus. We will also work together with Azerbaijan to address common security concerns, promote regional reconciliation and explore new opportunities for Economic Cooperation.”

I think Biden, speaking about promoting regional peace, talks about the support of the United States to the normalization of relations between Armenia and Azerbaijan and the signing of a peace agreement. Washington can contribute to peace between the two countries. At the same time, the question arises: Why did Washington not do it for 27 years?

A change in the geopolitical situation over the past 27 years and the taixi victory that Baku gained in the 44-day war changed Washington’s view of the South Caucasus. In other words, the United States accepts the consequences of the 44-day war and the emerging geopolitical reality.

The reasons that prompted Washington to cooperate with Baku

US President Joe Biden’s congratulation of President of the Republic of Azerbaijan Ilham Aliyev is a positive event in all cases, but there are the main reasons for the improvement of relations between the two countries in recent years.

Undoubtedly, the United States will not develop relations with any country in the absence of its interests to the level of sight. I think this is the case with Azerbaijan. The fact is that despite the fact that 20 per cent of Azerbaijan’s lands have been under Armenian occupation for more than 27 years and these years have been under de facto war with Armenia, the mega energy projects implemented in the region attract Washington’s attention. In particular, projects such as TAP and TANAP promising prospects for European energy supply make energy cooperation between Azerbaijan and the United States necessary. Baku’s geopolitical position, its proximity to other oil and gas countries-the Central Asia, its warm relations with the Arab countries, and, most importantly, its strategic partnership with Israel-increases the importance of Baku in Washington’s view.

The balance policy of Azerbaijan in the current Ukrainian-Russian war, as well as official humanitarian aid to Kiev make Azerbaijan a reliable partner. I think Washington views Baku as an alternative country in Europe’s energy supply and attaches importance to cooperation in this direction.

Strategic goals of Baku against Washington

The rapid development of relations between the two countries encourages Baku to set a number of strategic goals for Washington. I think we should have a number of goals for the United States at the present moment:

First, in 1992, the U.S. Congress adopted the “support for Freedom” Act at the initiative of the Armenian Lobby, and the 907th amendment prohibiting direct American assistance to Azerbaijan is still in force. Although a temporary moratorium is put on Section 907, it does not mean a complete repeal of the amendment. Official Baku must first of all increase efforts towards repealing this amendment.

Third, Azerbaijan has been implementing mega energy projects in the region in recent years. This makes our country an alternative energy source to Europe. However, such efforts do not fully meet the requirements of the West. In comparison with Russia, Baku supplies Europe with very little gas and oil. Cooperation with the United States in this direction can be expanded, necessary technical equipment and investment can be attracted.

Fourth, cooperation with the United States can be carried out not only in the energy sector, but also in many different areas. In particular, US companies may be involved in the region to restore Karabakh. The activities of specialized US companies in Azerbaijan, especially in Karabakh, can prevent Armenian provocations and possible tension in the region.

Turan Rzayev, political analyst at the Center for International Relations and Diplomatic Studies.