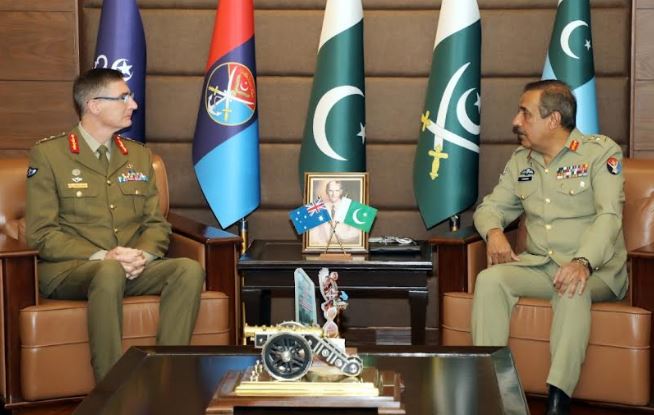 RAWALPINDI: General Angus J. Campbell, Chief of Defence Forces Australia, who is on official visit to Pakistan, called on General Nadeem Raza, Chairman Joint Chiefs of Staff Committee, at Joint Staff Headquarters, Rawalpindi today.  Matters of bilateral professional interest with particular reference to global and regional security environment and cooperation between the two Armed Forces were discussed during the meeting.

Later 11th Round of Pakistan – Australia, Defence and Security Talks and

8th Round of 1.5 Track Security Dialogue were held at Joint Staff Headquarters, Rawalpindi. Pakistan side was headed by Chairman Joint Chiefs of Staff Committee whereas the Australian side was headed by Chief of Defence Forces Australia. Both sides reviewed the ongoing cooperation between Pakistan and Australian Defence Forces in the fields of mutual exchange, training programs, joint exercises and other Defence related activities. Both sides reiterated the resolve to further strengthen and enhance security and defence cooperation between the two countries.

Defence and Security Talks were instituted in 2006 and have since been held regularly in Pakistan and Australia on alternate basis. Under the framework of this forum, the defence relations between the two countries are progressively expanding with greater substance.

The Australian dignitaries remained appreciative of the high professional standards of Pakistan Armed Forces, their achievements in fight against terrorism and continued efforts for regional peace and stability specially for peace in Afghanistan.