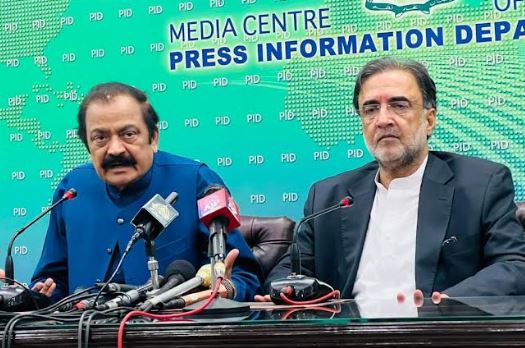 ISLAMABAD, APR 29 (DNA) — The social media is brimming with scathing criticism being poured on the PTI activists who have been blamed for arranging the anti-Prime Minister and his entourage protest as they entered Masjid-e-Nabvi in Madinah Munawwara.

Seeing the abdominal incident of staging a protest at the holy floor of Masjid-e-Nabvi, the Twitteratis went into frenzy and started scribbling their aversive comments on their Twitter posts and hashtag Toheen-Masjid-Nabvi-Namanzoor has become the top trend on Twitter today.

In a video uploaded last night, Information Minister Marriyum Aurangzeb and member of the National Assembly and federal minister Shahzain Bugti were seen along with others.  Ms Aurangzeb indirectly blamed former prime minister Imran Khan (who has ironically been vociferous for establishing Madinah state model in Pakistan) for giving directions for such despicable protest.

A few days ago, former interior minister Sheikh Rashid has given a hint regarding the happening of this shameful act during a press conference. “See what the people will do (to PM and his companions) when they reach there for Umrah,” he told the media.

It is pertinent to mention here that Sh Rashid has recently come back from Saudi Arabia after performing Umrah there during which he also visited Madinah. The former aide to ex-PM Imran Khan, Maulana Tahir Ashrafi who is also part of incumbent Premier Shehbaz’s Umrah entourage condemned the incident, stressing such acts must be stopped.

“I strongly condemned such an act and use of immoral and unethical words at the holy place. Maulana Fazlur Rehman wrote on his twitter handle: “The Haram-e-Medina is a sacred place for the entire Ummah and the loud voice here, according to the teachings of the Qur’an and Sunnah, is not only against the manners but it also causes wastage of all your good deeds.

What happened today could not be more insulting to the sanctity of Haram-e-Medina. Those who cannot keep the sanctity of the house of the Messenger of Allah, how can they be his followers.”

Maulana Tariq Jamil who performed Shab-e-Dua with Imran Khan last night, condemned the incident on his Twitter handle saying: “The violation of Haram Sharif seen in the form of protest in Masjid-e-Nabawi today is not acceptable in Islam at all. It deserves utmost condemnation.”

PTI Chairman and former prime minister Imran Khan’s ex-wife Reham Khan also blasted the PTI activists’ behaviour at Masjid-e-Nabvi. Star cricketer Shahid Afridi while condemning the incident tweeted: “This is a place where it is forbidden to raise one’s voice.

But we have forgotten the sanctity of the Harm-e-Medina while pursuing our political enmities. We have defiled the holiness of the State of Medina. Those who raised slogans on the sacred floor of the holy mosque, they could be identified but the identity of Pakistan has suffered an irreparable damage today.” =DNA