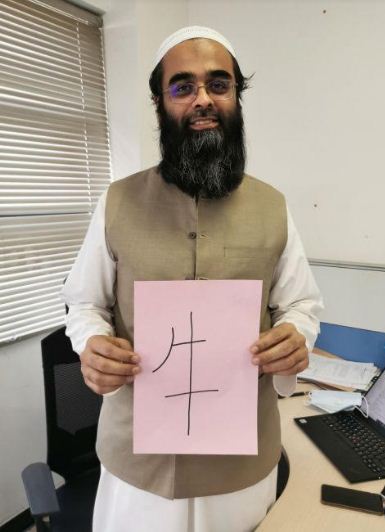 BEIJING, June 11: Wearing a plain kurta, a chic waistcoat and a white hat, under Faisal Bashir’s bushy beard is his shallow smile. Known by all workers as whisker dude, he is an accountant at Port Qasim Electric Power Company.

He has been mainly responsible for the company’s taxation, auditing, and external coordination. He is proactive and conscientious in his work, says a report carried by China Economic Net on Friday.

Jointly owned by Power China and Qatar’s Al-Mirqab Group, the coal power plant is one of the priority energy projects and the first large-scale power energy project undertook as part of the China-Pakistan Economic Corridor (CPEC).

It is also an important milestone in the iron-clad friendship between China and Pakistan, as well as a successful model of China-Pakistan energy cooperation projects and a benchmark project under the CPEC’s fast-tracked Early Harvest programme.

Faisal is the first Pakistani tax consultant hired by the power plant to optimize its tax management. He used to work in professional accounting agencies such as PricewaterhouseCoopers and Deloitte for many years, and joined the Qasim power plant under the influence of CPEC.

Faisal said that he still remembered how excited he was to see the Qasim project when he came to the plant for a job interview.

Pakistan’s tax system is complex. Qasim Electric Power Company is not registered in the same place as its business place, which involves different kinds of taxes and the company has to pay a large amount of taxes every year. Therefore, it is of great importance for the company to optimize its taxes according to relevant regulations of Pakistan.

In this case, Faisal made a thorough study of relevant tax laws, assisted the company in completing the import of goods and equipment and exempting part of income tax.

As two units connected to Pakistan’s national grid, the power plant’s consumption of coal was increasing day by day. In order to ensure the cash flow of the company, Faisal actively assisted in the reduction and exemption of related tax. Up to now, he has successfully handled 145 shipments of coal into Pakistan, saving millions of dollars in cash expenses for the company.

According to the benchmark electricity price policy, the Qasim project needs to apply for commercial operation approval to the Pakistan’s National Electric Power Regulatory Authority (NEPRA).

In April 2018, the second power generation unit began commercial operation. Faisal and the project team raced against the clock.

Under the requirements of the NEPRA on data integrity and timeliness, Faisal compiled dozens of solid and reliable materials with a total of more than 5,000 pages and submitted them to the NEPRA in time.

Since then, he actively maintained communication with the Islamabad team, assisted in clarifying the questions raised by NEPRA and cooperated with relevant staff to conduct on-site inspections.

When talking about this story, Faisal said, “We did go through a lot of difficulties, but we finally overcome them. In addition to the sufficient materials we prepared in the early stage, it is also imperative to answer the questions of NEPRA timely and accurately.

This is the result of our team’s unity and cooperation towards the same goal. Our colleagues in Islamabad and the financial team have done their best to achieve the goal.”

In his work, from contract signing to daily business communication, Faisal always communicated with the auditors in every detail, so that the auditors could have a better understanding of the project and the company structure.

From 2015 to 2018, the accounting firm issued the company qualified financial reports for four consecutive years. Last year, Pakistan’s tax authority conducted a tax audit on the company. In order to properly solve relevant issues, Faisal took the initiative to discuss with the pundits and the company staff and finally solved those issues reasonably and effectively.

Faisal has won unanimous praise from the plant employees. “He has been very careful and able to consider critical points that we might not have noticed, giving us a lot of professional support. I’ve learned a lot from him and even improved my English skill since working with him,” said Wang Qingxi, an employee from Financial Management Department.

As a local, he makes full use of his language advantages, especially when communicating with the State Bank of Pakistan, Federal Board of Revenue, Sindh Revenue Board, and accounting firms, he always uses Urdu to effectively resolve problems.

Focusing on the long-term development and core interests of the company, Faisal can also handle various external affairs flexibly, which not only ensures the accelerated implementation of the localized talent strategy, but also effectively promotes the operating efficiency of the company.

When the COVID-19 outbreak occurred in Wuhan at the end of 2019, Faisal and other Pakistani staff encouraged their Chinese colleagues and send their best wishes. He said his New Year’s wish is Chinese brothers and sisters stay healthy and safe.

After the COVID-19 outbreak in Pakistan, he worked from home in Karachi and keep in touch with tax authorities and his colleagues at the plant site.

Now, more and more Pakistani brothers and sisters who are full of hope for the project have joined the family and become indispensable members of it.

They give full play to their professional skills to serve the company and safeguard the legal rights and interests of the company.

They work hard along the beautiful Arabian coast for the common development goal, adding vitality of sustainable development to the project and writing a new chapter in China-Pakistan friendship, the report added.