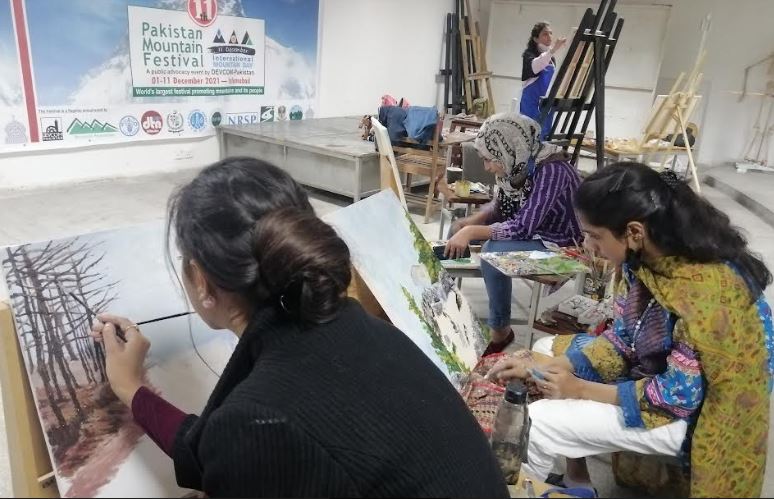 RAWALPINDI, DEC 1 /DNA/ – A live painting competition on the theme “mountains in the changing climate” marked the opening of 11th edition of Pakistan Mountain Festival (PMF) on Wednesday. The festival is an annual flagship event of Development Communications Network (Devcom-Pakistan) to commemorate the UN’s International Mountains Day (IMD).

The participants painted real-life scenes from the northern parts of Pakistan depicting the impact of climate change. Melting glaciers, avalanches, landslides, lake outbursts, deforestation and degradation, and loss of biological diversity were the content of oil-on-canvas paintings. The paintings not only reflected the aesthetic sense of the participants but also the level of their understanding of the climatic challenges.

Hanna Aslam, a Westminster Academy student participated in the competition, mentioned that the young generation is very concerned about the loss that older generation have done to the environment. Their irrational consumption behaviour has caused the climate changing that is impacting the life and livelihood of the people right from the mountains to the downstream.

FJWU Head of Fine Arts Raheela Mushtaq said engaging art students in such a creative pursuits is imperative to highlight the impact of climate change as they reflect the mountain miseries. Awareness raising and education about the causes and consequences of the climate change is very important for the society. Such events support it.

Devcom-Pakistan Creative Director Riffat Ara Baig said that they are engaged with students of different age groups for the last two decades to sensitize them about the environment and conservation of natural resources. The educational institutions shall consistently engage their students and their parents to raise awareness about rational use of resources around us.

Speaking to this scribe, Executive Director Devcom-Pakistan and founder and director of Pakistan Mountain Festival Munir Ahmed said the paintings have visual impact more than the speeches and writings. That is why the live painting competition has become a tradition of the Pakistan Mountain Festival since its inception in 2005. International Mountain Day (December 11) is dedicated to raising awareness about opportunities and challenges facing mountain regions. Art pieces can play a pivotal role in this regard.

He said we need to build alliances that will bring positive change to mountain peoples and places around the world. Devcom-Pakistan has been organizing different events to mark IMD engaging mountain communities and stakeholders in the mountain regions and downstream with the collaboration of different partners from government, national and international nongovernment and UN organizations, and academia for about two decades. Pakistan Mountain Festival has become Pakistan’s global image for mountain conservation, management and development of natural resources in the highlands.