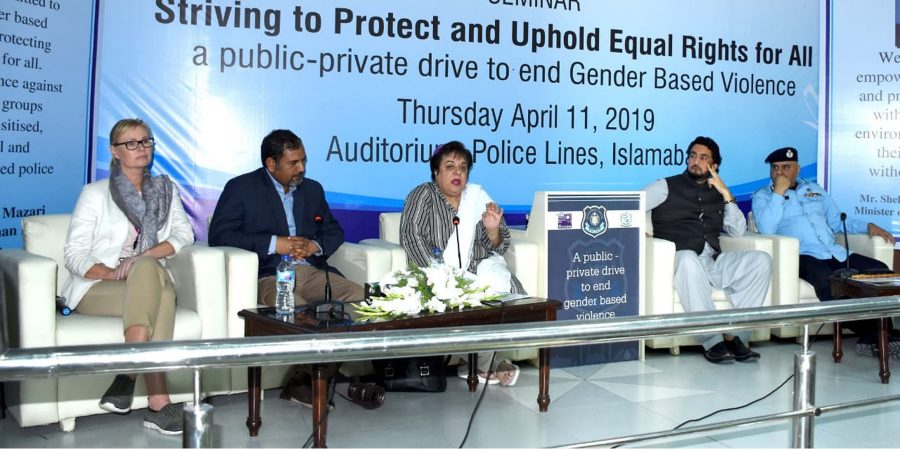 ISLAMABAD, APR 11 (DNA) – Human Rights Minister Dr Shireen Mazari has said that mind set of the society needs to be changed along with law enforcement and judiciary sensitization towards gender based violence.
She said we are committed to ensure the equal environment for all and ending gender based violence.
She said besides effective implementation of the existing laws, new legislation is on cards to protect the rights of every citizen especially women and children from domestic violence. She said prevailing human rights situation in Pakistan is far better than many other countries.
She was addressing the seminar on “Striving to Protect and Uphold Equal Rights for All: A public-private drive to end gender based violence” organised by Islamabad Capital Territory police in collaboration with Rozan here in Islamabad on Thursday.
Minister of State for Interior, Shehryar Afridi was also present on the occasion.
The purpose of the seminar was to promote equal rights for all by ending gender based violence and generate discourse on actions required on ending gender based violence and share the steps taken by ICTP to deal with the issue.
Addressing the seminar, Dr Mazari said that incumbent government was fully committed to provide all possible support to the survivors of violence.
Besides implementing laws, there is a need to change the society’s mindset to end the gender based violence. Our ministry is working on creating awareness about the laws, especially for sensitization of public.
She said gender based violence is central issue and we need to tackle the real issue on priority which women have been facing from society.
She said we are committed to ending gender based violence by protecting human rights for all adding that increasing violence against marginalized groups requires a sensitised and professional police force.
She also lauded the professionalism and performance of the Islamabad Police and said police officials perform their duties to ensure the safety and security of the public and urged the public to respect them. She said the minorities are being given their own personal laws and in this connection, Hindu Divorce and Marriage Law had already exists and Christian Divorce Bill would be presented in the parliament soon.
Dr Mazari said steps have also been taken for the welfare of transgender community and ensure the implementation of the transgender law. She said we have one of the most comprehensive laws to protect the rights of transgender and we took ownership of this law and implementing it. She said a separate ward for transgender people have been established at PIMS hospital and they are getting treatment free of charge and without facing any inconvenience. She said domestic workers bill has already been approved by the cabinet and would soon be presented in Parliament.-DNA
===============