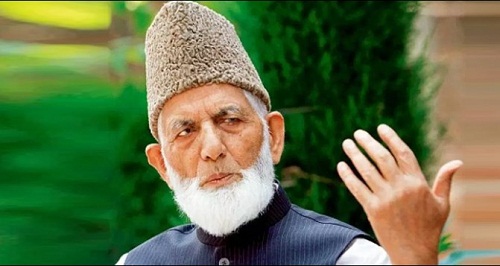 Veteran Kashmiri leader Syed Ali Shah Gilani passed away last night at his home in Srinagar, at the age of 92.

Gilani received his early education at Sopore, and finished his studies at the Oriental College, Lahore Pakistan.

He spent his boyhood in the headquarters of Plebiscite Front at Mujahid Manzil.

President Dr Arif Alvi expressing deep grief and sorrow over the sad demise of the veteran leader Syed Ali Shah Gilani, said Kashmir is deprived of a great leader who remained steadfast against the Indian imperialism all his life.

In a condolence statement, he said Ali Gilani was a brave, courageous and sincere leader. He prayed Allah Almighty to rest the departed soul in eternal peace.

Prime Minister Imran Khan in a statement said, the passing of Kashmiri freedom fighter Syed Ali Gilani who struggled all his life for his people and their right to self determination, deeply saddened him.

He said Gilani suffered incarceration and torture by the occupying Indian state, but remained resolute.

He said the Pakistan flag will fly at half mast and the country will observe a day of official mourning.

Foreign Minister Shah Mahmood Qureshi said, Pakistan mourns the loss of Syed Ali Shah Gillani, the torch bearer of the Kashmir freedom movement, who fought for the rights of Kashmiris till the very end, under house arrest of Indian occupation.

Pakistan has expressed the deeply mourn on the death of the iconic leader of the Kashmiri resistance, Syed Ali Shah Gillani, who was under prolonged house arrest in Indian illegally occupied Jammu and Kashmir.

Expressing the condolence, Foreign Office Spokesperson Asim Iftikhar Ahmad in a tweet said the nation pays rich tribute to his life-long struggle for justice and freedom.

He said Ali Gillani, the true voice and hero of the Kashmiris’ struggle for self-determination, inspired three generations of Kashmiris in resisting the illegal Indian occupation and unabated tyranny.

He prayed may his soul rest in Peace, and continue to be an inspiration for those carrying his mission forward to bring to an end the illegal Indian occupation of Jammu and Kashmir.

In his video message the Information Minister said the sad news of Gillani’s death has shocked and saddened the people of Kashmir as well as Pakistan.

He said the candle to fight against Indian tyranny lit by Syed Ali Gillani in Kashmir would continue till winning independence.