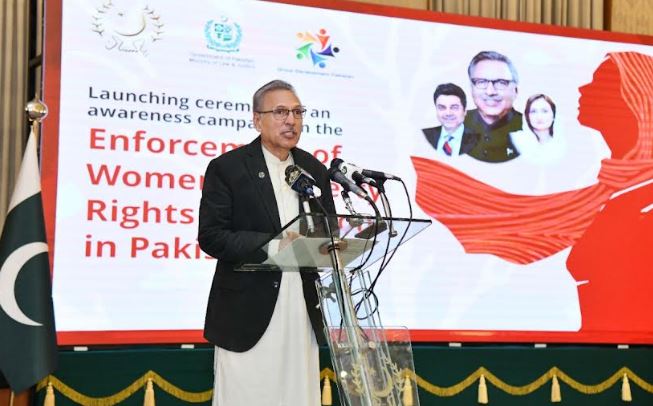 ISLAMABAD, Feb 16: President Dr Arif Alvi Wednesday said the true implementation of laws on women property rights across the country was inevitable for their empowerment, by doing away with the cultural traditions contradicting the Islamic injunctions.
The president, addressing the launching ceremony of an Awareness Campaign on Enforcement of Women Property Rights Legislation in Pakistan, said the financial inclusion of women was also equally essential for their empowerment and self-dependence.
Emphasizing the encouragement of women to go into business, the president said in today’s era of modern technology, the women could also establish their businesses while being at home.
He repeatedly emphasized the role of media and Ulema to help change the society’s attitude towards the provision of women property rights which had been guaranteed under Islam as well Pakistan’s constitution.
The president said by incorporating awareness messages in their dramas and other programs, the media could contribute to aware the women about their rights and the tools available for their protection.
Similarly, the Ulema could also utilize their pulpit to convey the message effectively and rectify the cultural traditions depriving the women of their rights.
Referring to the lynching incidents in Sialkot and Mian Channu, the president said the perpetrators of such incidents were in fact naïve to the teachings of Islam which never allowed the mobs to hold courts on the roads and kill even a mentally deranged person on charges of blasphemy.
President Alvi said though Islam had guaranteed women property rights 1400 years ago but it could not be materialized in our society for being influenced by the cultural traditions.
The president spoke high of Balochistan High Court’s verdict of not allowing the transfer of women inherited property to anyone prior to her ownership.
He also committed to taking up the matter with the Balochistan chief minister to adopt the women property laws being implemented in Islamabad, Punjab and Khyber Pakhtunkhwa.
He said the awareness campaign would also guide the deprived women approach the ombudsmen offices for their rights and the number of such women could be in millions.
President Alvi also urged the Ombudsmen to publicise their decisions which would aware the women about the remedies available for their property rights. Besides the federal ministers, ombudsmen and parliamentarians, a number of diplomats from different countries also attended the ceremony for whom the Presidency also arranged live English interpretation – a feature introduced permanently to translate the usually Urdu-medium proceedings of the events.